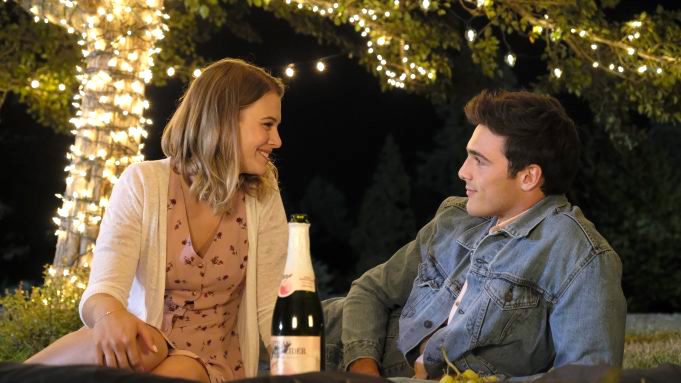 “2 Hearts” (PG-13) Is a romantic drama that stars Jacob Elordi, Adan Canto, Tierra Skovbye, and Radha Mitchell. Two couples lives unfold in different decades and different places, yet a severe health issue brings them together. The director is Lance Hool. It is based on the true story of Leslie and Jorge Bacardi and Christopher Gregory.

Australian actor Jacob Elordi (“Euphoria,” “The Kissing Booth”) plays Chris, a college freshman who falls in love with a classmate played by Tiera Skovbye (“Riverdale,” “Once Upon a Time”). He’s looking for his purpose in life and finds it through his new love. Meanwhile, in another place and time, Adan Canto (“Designated Survivor,” “Narcos”) plays Cuban exile Jorge, who falls for flight attendant Leslie, played by Radha Mitchell (Man on Fire, The Shack).

The frantic opening scene of a hospital gurney rushing to an operating room with Chris lying unconscious gives a hint to the tone. Through a parallel storyline, we follow both couples’ lives as, eventually, their futures intertwine.
Narrated in voice-over by Chris, he guides us through not only his life but the life of Jorge Bacardi of the Cuban rum dynasty and what has been described as a “miracle” he experienced in 2008. Two stories unfold in one film that flows gently, without rushing its characters. You’ll see a beautiful wedding, happy families, along with the significant health issues of each couple.

The tricky part in films such as these is finding balance. I’m pleased to report smooth, natural transitions along with reasonably good development of characters. Yes, the dialogue is flat at times, and we do witness one-dimensional characters as written, yet the film delivers its intended message of connection and purpose. To say more would be to spoil the movie and ruin the surprise for all.

The Bottom-line, “2 Hearts” is an inspirational movie that plays like a Hallmark movie, which is fine with me. The intended messages are brought to the forefront with believable and charming characters. Bring your Kleenex. You may shed a tear or two. Playing now only in theaters.