Aaron Fisher, the writer, star and director of “Inside the Rain,” and I spoke on April 30, 2020, during the pandemic quarantine. Fisher was eager to speak about his film; he also chose to talk about his roller-coaster life living with a Bipolar diagnosis. I found his unprecedented candor during our interview, to be refreshing, as I’m hard-pressed to recall ever receiving such sincere answers that were voluntarily expanded upon by talent. He sheds light on not only the stigma that living with Bipolar produces—he adds personal commentary to his life inside a ‘psych ward’— to mirror his words.

Here’s part of our 30-minute chat:

Hi Aaron, I want to congratulate you on making such a great film. You’re very brave to have written the script based on your personal struggles with Bipolar disorder.  Can you tell us about your writing process, and how the script came to fruition?

Aaron Fisher: After the first three months of writing, I was so down because I thought it was so bad. I got so down on myself I became very depressed, I wasn’t moving or talking. I was so defeated I was persuaded to voluntarily check myself into a local psych ward. They performed ECT on me three times a week for a couple of months; you have to stay there and can’t leave. I felt like a prisoner. And by the way, ECT stands for electroconvulsive therapy, and it’s supposed to shock your brain into being less depressed, giving your brain a mild seizure. I never felt it because an anesthesiologist put me out. It takes away your short- term memory, but it does come back.

I didn’t intend to write a script about myself and believe me, I really didn’t want it to be about me, but after writing the script for three or four years, the script found its way revolving around my life, and it became me.

Aaron Fisher: I’m a big fan of “The Graduate.” I love the film, but I was also feeling very much like the Graduate. When I graduated from film school, and I felt like nothing good was happening. I felt I could relate to the Benjamin character—basically me just paying tribute to “The Graduate.”

Your script is so wonderful. I’ve attended screenwriting seminars at film festivals that discuss how difficult it is to get original material green-lit. How did you go about doing that?

Well, the short answer is private investors. Aside from that, we had Christine Vachon of Killer Films, put her name on the film. She liked the script even when I was only two years into it. She decided to put her name and Killer Films up on the film. I think her blessing really helped a lot in attracting stars and everything because of it. Because Christine Vachon was one of the executive producers, it was like, “Oh, this is a legit movie.” We’re very optimistic about streaming and video on demand. So far, the numbers are looking really good, and they’re continuing to go up, which is great.

One of my favorite lines occurs as Benjamin, your character, says, and he’s serious to a girl that he had just been with, he says, “We should get married. Want to meet my parents?” It was just so natural. Was that an example of the mania part, where you go from one extreme to the other? He’s so excited, but he really means it. Is that what you were trying to do there? In normal life, you would kid about that, but he looked serious, and he was.

Yeah, he was. My answer is that, well, in real life, with this woman that I fell in love with, that happened to be a sex worker. Within a few hours, I had spoken to her over the phone and Skyped for a week before we actually met in person. I already knew some things about her, and I knew she was a sex worker because she told me all that. And within a few hours of meeting her in person, I said, “Let’s get married.”

It’s possible that I was hypomanic, slightly manic when I was saying that or delusional, but I really meant it. And she said, “Well, you’re in school.” And I said, “So when I’m out of school?” She said, “You don’t have a job.” I said, “But I have a job.” And she said, “And I want this particular engagement ring.” I said, “With a job and that engagement, right?” She’s said, “Yes, I would think about it.” The spontaneity and impulsiveness of both of us were so insane.

On date number three, I brought her to meet my mom, dad, and my older brother and my soon to be sister-in-law at a restaurant. When we got to the dinner, apparently my father had been Facebook stalking us, and said, “Oh, your modeling is so impressive.” And they really hit it off. With a lot of things in the movie, what happened in real life was one hundred times more extreme. You know, because in the movie I had to make everything fit.

Can you tell us more about the movie within the movie? 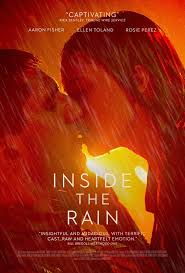 The movie that Ben Glass is making within the movie is with the manic delusion, as Dr. Holloway says, “This is a manic delusion.” You’re not going to make a scripted film that’s going to prove that you’re just insanely crazy. His parents in the movie, they don’t want him to make the movie. I mean, they just want him to quit the hearing and transfer, which is an option for him. But he’s so stubborn that he doesn’t want people to think he’s guilty of what he did, which he did. So, to him, it’s like an injustice, and it’s like this awful thing.

How are you similar to the character Benjamin Glass?

I can relate to Benjamin Glass, although he is different in many ways than me, but in need of validation for both being a filmmaker who is good at filmmaking and validation for being innocent. In terms of those two things that Ben is seeking desperately for in terms of validation, I joined at the hip with Ben Glass. So me making my feature film “Inside the Rain” was a lot like Benjamin Glass making his film within the film.

Eric Roberts, I interviewed him this morning. He was just great; what did he bring to your movie?

He’s hilarious. I mean, he’s really, really funny on set. So many takes were ruined because I burst out laughing. I actually love Monty. He’s down on his luck because music videos died out, he had a big music video production company that died out with YouTube and other platforms. And he was living in his mom’s garage, because I thought that was funny. Eric’s a great actor and a master of his craft.

Do you feel that writing, directing, and starring in your film has helped you to understand and possibly work through your condition?

It’s been very therapeutic to write, act, and direct. I had to funnel lots of anger into productive and positive energy. In a therapeutic sense, I truly am less angry. In taking the film around to film festivals, and hearing people applauding my efforts is very meaningful to me.