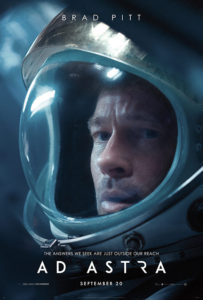 Brad Pitt plays astronaut Roy McBride, who’s sent on a top-secret mission to discover what’s behind the damaging electromagnetic pulses coming from the planet Neptune. His father, played by Tommy Lee Jones, is a decorated astronaut that has been missing in space. The film is directed and co-written by James Gray–he creates a world that is both familiar and fantastic.

Brad Pitt carried the film from start to finished, and I was engaged from the get-go. At its core, a father-son heartbreaking abandonment theme in which Pitt renders a raw, emotional performance. Here’s the defining quote from Pitt: “He [his father] could only see what was up here, [space] and missed what was right in front of him.”

I’d say check it out! Fantastic realistic space travel with a ‘Mad Max’ tone, and cinematography that is (out-of-this-world), pun intended— I enjoyed the sci-fi trip to space.