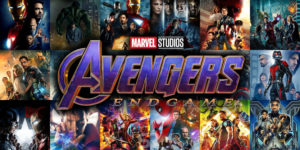 “Avengers Endgame” at its best—illustrates the qualities of being a true hero—all while Marvel’s greatest cinematic hits are warmly and entertainingly revisited! “Endgame” is a culmination of 22 Marvel Cinematic Universe (MCU) films debuting in 2008 with Robert Downy Jr. as “Iron Man, ” that brought the beginnings of Phase One, ending in the crossover film “Marvel’s The Avengers” (2012). Phase Two began with “Iron Man 3” (2013) and concluded with “Ant-Man” (2015). The MCU is currently in Phase Three, which began with the release of “Captain America: Civil War” (2016) and is set to conclude with “Spider-Man: Far From Home” July (2019). Essentially creating a finale film that satisfies both fans and newcomers, is no easy feat—by all accounts, “Endgame” shines through the evenly paced scenes, where actors have a solid shot at displaying emotion.

A gloomy opening as it’s been three weeks since the malicious villain Thanos wiped out half of the universe by utilizing all six Infinity Stones with a snap of his fingers; meanwhile, Brie Larson’s Captain Marvel rescues Iron Man; and the remaining team comes to terms with Thanos’s dire results. In keeping with a no-spoiler review, Thanos, Josh Brolin is “dealt” with randomly by a hero that shall remain nameless. Noticeably, Thanos’s characterization details are finely tuned—this was not the case in “Infinity War”—uneven skin tones of purples and brown hues were noticeable, the faint almost nonexistent images of his armored suit and skullcap helmet are now clearly seen, adding intrigue along with captivation.

Fast-forwarding five years, the super-hero group hits the ground running to pull off their plan; a time-travel heist. Featuring a witty narrative in revisiting past time-travel movies, “Back to the Future,” “A Wrinkle in Time,” “Hot Tub Time Machine” and “Terminator” they are hilariously referred to and discussed. Importantly, we gain insight as to the time-heist concept that dominates the core of the film.

Robert Downey Jr.’s Iron Man, Chris Evans’s Captain America, Chris Hemsworth’s Thor, Scarlett Johansson’s Black Widow, Mark Ruffalo’s Hulk, Jeremy Renner’s Hawk-eye and Paul Rudd’s Ant-Man are front and center. Directors, and brothers Joe and Anthony Russo delicately navigate the cast into smaller group conversations that work well to establish reacquaintance. The light banter between the group, ascertains the dichotomy of the members, although ultimately serves to further character elaboration. The amusing banter scenes are some of my favorites, as we view a family atmosphere of caring, warmth, devotion, and respect. Memorable lines do resurface; “Don’t do anything stupid until I get back.” “How can I, you’re taking all the stupid with you” and the ever favorite, “I could do this all day.”

As far as the three hour, 1 minute run time is concerned, I found the time to fly by, just make sure you have plenty of snacks, as one would hate to miss any of the film due to all of the major characters, and they do all make an appearance. Captain Marvel does gather the Wakanda females from “Black Panther” along with other female characters toward the end of the film to fight together in an awe-inspiring battle scene. Look for Stan Lee’s cameo during the 70s, along with an earlier  disguised Ken Jeong. No overstuffed feeling here, the surprises, and Alan Silvestri’s original score provides catchy accentuation, most notably Chris Pratt’s Star-Lord’s intro tune “Come and Get Your Love” by Redbone—with the addition of Pratt singing along while ear-budded crafts instant nostalgia. A minor flaw occurs in Thor’s new image scenes (again, no detail spoilers) that become redundant while taking away from his ability to contribute to the cause—in my case downright annoying.

As far as the teaser end-credit scenes are concerned, there are none. If you do stay through the lengthy end-credits, the final image is the Marvel red logo accompanied by a sound that could be described as a ping, clang or cling of a metal hammer forging a metal object. Could this be a nod to Tony Stark’s, “Iron Man” 2008 movie that began the MCU series, those long days as a prisoner in a cave when he forged his Iron Man helmet out of metal?