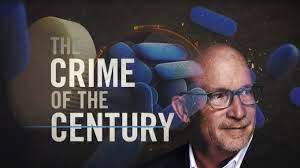 Hi Carl and hi everyone, tonight I’m going to talk about the heartbreaking movie that explains the evils of opioids in our country. “The Crime of the Century” is a two-part film that is streaming now on HBO MAX. It’s a documentary by Academy Award winning filmmaker Alex Gibney.

Part 1 tells the story of the three Slaker brother’s history in Brooklyn, New York. The brothers use fraud to promote their pain-killing products and blamed the users for overdoses. Frequently pain centers prescribed multiple drugs against the family’s consent.

Part 2 summarizes the many arrests and court trials that ensued as the victim’s families sue to recover damages.

We find out that the goals of the pharisaical companies included prescribing higher doses and making sure the drugs were approved for any type of pain, not just end of life.

The Bottomline: I’m in, four stars out of four. Here’s my take, I respect Alex Gibney as a filmmaker as he extensively researches his projects. You’ll see the Opioids crisis as you’ve never seen it before. Be prepared to be angry, vindicated, and relieved. I highly recommend that you view both parts as the information you’ll gain is noteworthy.

Thanks so much for listening in tonight to hear about HBO Max’s “Crime of the Century” You can check out my past interviews with Alex Gibney on my website Sarahsbackstagepass.com, and I’ll see you next week.