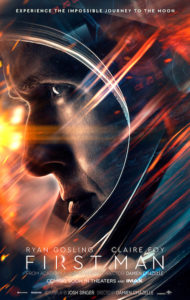 There’s a saying from the past, “Behind every successful man there is a woman.” In “First Man” (PG-13) Director Damien Chazelle tells the true story of the United States space program focusing on Neil Armstrong (Ryan Gosling), his family and the events leading up the Apollo 11 mission to the moon in 1969.

Claire Foy as Janet Armstrong, Neil’s wife, shines as her character is written to portray strength, courage, love, uncertainty, and fortitude. Yes, it’s true that her scientifically gifted, yet aloof husband Neil—had to endure life or death situations and in particular the claustrophobic, nightmarish conditions of space travel—yet, it’s Janet that holds him to exemplify the fatherly standard she desires. Regarding her performance, she portrays brilliant restraint, followed by her controlled authority.  Bravo!

The film, based on the book “First Man: The Life of Neil A. Armstrong” by James R. Hansen. What I also appreciated in the film is the personal viewpoint of Neil Armstrong, his emotional family issues including the courage it took to complete the mission. Family picnics, poolside swims and the backyard barbeques with neighbors, provide a glimpse into the family dynamics. Gosling’s performance is intriguing to view. Silently grieving from the loss of his four-year-old daughter from cancer, he perseveres. In a press conference, a reporter asks him if the loss of his daughter has been tough to shoulder, his wise reply, “I think it would be unreasonable to assume it wouldn’t have some effect.”

Numerous astronauts die in the eight years leading up to the actual moon landing covered in the film; we view Gosling and his family suffering through the funerals, which hit oh, so close to home as the film shows his own daughter’s funeral in the first fifteen minutes. Serious and quiet by nature, Armstrong drew inward after his daughter’s loss. Gosling presents an emotional performance of a driven yet, despondent father. His performance is superb. Even though, we know Armstrong is the astronaut who first walks on the moon, the personal circumstances leading to the historic moment are astonishing.

Cinematically, filming with IMAX cameras enhances the space sequences that lead us to the final awe-inspiring moon-landing scene. Similar to director Christopher Nolan’s work in “Dunkirk” we are given a realistic portrait what it must be like to be in the seat of an astronaut’s capsule, presenting the harrowing ‘rocket science’ calculations and the split-second life or death decisions.

Although a little slow in parts, you may tear up, when revisiting the iconic, yet underplayed American Flag planting on the moon that offered a beautiful, chilling, patriotic moment of our nation’s history.

Also Posted to The Alliance of Women Film Journalist: https://awfj.org/blog/2018/10/13/first-man-review-by-sarah-knight-adamson/