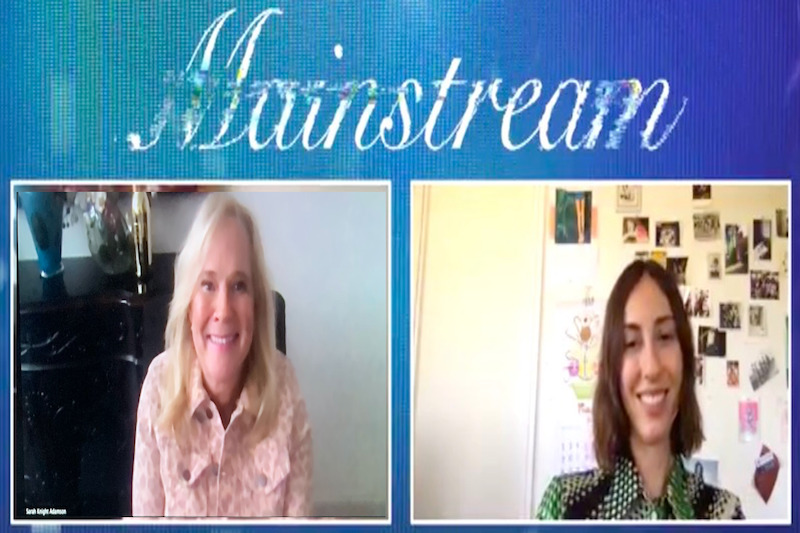 I interviewed Gia Coppola on May 4, 2021, via Zoom for her second film, “Mainstream,” starring Andrew Garfield and Maya Hawke. “Mainstream” is a cautionary tale regarding social media and it’s effects on our lives.

Sarah Knight Adamson: Hi Gia, I’d like to congratulate you on your film “Mainstream.” Your creativity shines in the film, can you talk about the opening scene, as when I first saw it, I kept thinking of Edward Manet’s painting ‘The Bar at Foleese-Bergère which I’ve seen in London’s Courtland Gallery, were you making a reference to this painting? The look on Maya’s face is so similar.

Gia Coppola: That actually is the inspiration. I’m glad you picked up on that. The image always stayed with me, and it is a popular classical painting. I’ve always loved that painting and wanted to find a way to recreate it.

SKA: Can you please talk about what Maya Hawke, the daughter of Uma and Ethan, brings to your film?

GC: Yes, it was very instantaneous when I first saw her in character as Frankie; she really came alive for me.  I met her during a photo shoot when I was photographing her, and we really hit it off, and we are really in sync. It was a fun collaboration to have with her as she’s super talented. It’s also a tough character to play because it’s very minimalistic.

SKA: Andrew Garfield, what a fabulous actor, “Hacksaw Ridge” is one of my favorite films, what was it like to work with him?

GC: To work with that level of talent is extremely exciting; he was a great collaborator. We workshopped several scenes to flush out the character; he’s fun and exciting, he’s a great dancer, and he’s super talented.

SKA: What was your favorite scene to film with Andrew Garfield?

GC: Him running naked down Hollywood Blvd. I couldn’t believe we were able to pull that off.

SKA: Yes, I couldn’t either, and I could tell it was not 4:00 am in the morning as when those scenes are usually scheduled.

GC: Actually, we were supposed to film early in the morning, and it got pushed to the middle of the afternoon.

SKA: Whenever I see that Jason Schwartzman in a film, I’m already sold. I have interviewed him and appreciated his film knowledge. Did he offer any suggestions for his role?

Jason is a brilliant actor, and you never know what you’re going to get from him as he’s hilarious when he comes on stage. He was a little nervous as he doesn’t use social media much. I told him not to worry about that, and he just improvised and ran with it; he is amazing. He’s so great at improv.

SKA: What do you see as the message of your film?

GC: There are a lot of messages that I’d like people to take away, and I’d like them to decide, although one thing I can say is ‘all that glitters is not always gold.’

SKA: Thank you so much for speaking with me today; I wanted to tell you to please offer more wine tastings with your dad, Francis Ford Coppola, as that was fabulous, and best of luck with the film!

Frankie, Maya Hawke is a disenchanted young bartender in a comedy club who works together with an aspiring writer and singer Jake, Nat Wolff. He serves as her best friend and a moral compass, although he hopes for a romance between them.

Frankie’s hobby is shooting photographs and videos throughout L.A., as she’s looking for material to upload to her undersubscribed YouTube channel. She begins watching a man, Andrew Garfield, Link dressed in a mouse costume, and decides he is a suitable candidate for her channel. It turns out that Link has a mysterious past, has no cell phone, and acts like a ranting self-proclaimed philosopher-prophet. Together, Maya and Link hatch a plan to create more videos changing Maya’s boring life into one of excitement, purpose, and hope.

In need of the manager, they team up with Mark, Jason Schwartzman, who guides them into the world of virtual fame. We see numerous examples of creativity in the film, even vomiting thumbs up emojis’ and other creative use of graphics.

Coppola’s sharp lens takes us through the colorful world of social media along with all of its trappings. It’s a cautionary tale, one which has a shocking ending that isn’t far from today’s headlines. I enjoyed the film, as it kept me guessing while engaged. I can recommend all seeing it over 17, as it is clearly rated R. Despite our frustration with social media, the fact remains that it is powerful, and it can’t and shouldn’t be ignored.

Streaming now on Amazon Prime, Apple TV and others.