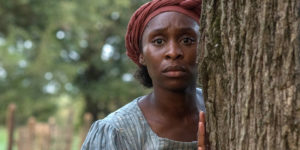 Cynthia Erivo in a Stellar Performance as Harriet Tubman

“Harriet” is a biographical film about a runaway slave named Harriet Tubman who returned to the South time after time to free other slaves. During her 10-year span, she brought over 300 slaves to freedom using the Underground Railroad. She is an American National hero!

In a riveting performance, Harriet is played by Cynthia Erivo with supporting roles by Leslie Odom Jr. Joe Alwyn and Janelle Monae. I screened this film at the Toronto International Film Festival. #TIFF

It’s a compelling portrait of a remarkable woman, and the dangers faced by slaves trying to escape to freedom are highlighted. It provides an inspirational representation of Harriet Tubman and the times she lived in. The film itself is beautifully shot, although the script reads more like a High School history lesson, more depth is needed surrounding Harriet and her relationships.