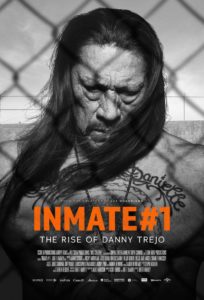 “Inmate #1: The Rise of Danny Trejo,” the movie title, says it all, he was addicted to heroin at age 12, served a 10-year prison sentence for armed robbery in the most dangerous intuitions in our country, San Quintin and Folsom Prison, then worked as a drug counselor and finally being sober for 20 years lead him to become one of Hollywood’s most prolific and recognizable stars. Danny Trejo has indeed risen—out of addiction, violence, poverty, and an unstable household—now, he’s a hero and role model to many. Trejo has made it out of the depths of despair to a leading role in “Machete,” of which he not only gets the girl, he serves as a Latino ‘Super Hero’. Here’s the great news, the film comes from the heart, it’s a raw, uplifting portrait of a person with a giving, and humorous soul.

Many of you know Danny Trejo as the menacing-looking, tattooed actor and villain in action films. He’s been in many films, over 300, and is typically cast as ‘inmate #1’ or ‘prisoner #1,’ hence the title of his documentary. My first look at Trejo was in 2007 when I viewed the fake trailer for the movie “Machete” by director Robert Rodriguez; I thought it was hysterical. The audience buzz for the trailer was so phenomenal that Rodriguez decided to go ahead and make a real movie casting Trejo as the lead. The cast’s star power includes Robert De Niro, Jessica Alba, Steven Seagal, Michelle Rodriguez, and Don Johnson. “Machete,” the movie garnered a leading role and a name to the face we all somewhat knew.

Speaking of “Machete,” I appreciate the humor of that film, and the Super Hero role model he has created for the Latinx community. I’ve even watched “Machete Kills,” my favorite line: “Machete don’t text.” Yes, I’m still waiting for “Machete Kills in Space.” I’ve also found it interesting that our paths have crossed with so many of the stars he’s worked with and my interviews with those stars. To name a few, all of the kids from “Spy Kids,” both Kal Penn and John Cho of, “A Very Harold & Kumar 3D Christmas,” and most recently Eric Roberts, from “Runaway Train.”

After viewing his heart-wrenching, inspirational and humorous film, one can’t help but see Trejo in an expanded light. Here’s a down-on-his-luck teen, addicted to drugs that ultimately transformed his life without much help from his family. It’s important to know that he was sober for 20 years before starting his Hollywood acting career, and that was by chance. His philosophy is simple; any good that comes his way is a result of good that he brought to others. Case in point, he was sponsoring a friend in AA and was asked to go to a movie set. That set was “Runaway Train,” in which he was ultimately cast as a boxer in the movie, and the rest is history.

Director Brett Harvey, and filmmaker Adam Scorgie present interviews with family, friends, and colleagues, with Trejo front and center. They offer a portrait of a grateful person who has never stopped giving back since he found his purpose in life. Wherever he is working on a set, no matter what state, he inquires about visiting prisons and speaks to inmates. He has a natural gift of speaking, and when talking about addiction and crime, he has first-hand experience. Those segments are especially inspiring to view.

Perhaps the most realistic segments are when Trejo re-lives his prison days, and those deep, dark memories come flooding back as he speaks from his heart. These scenes did cause me tear-up, as he knew he would die in prison if he didn’t change his mindset. His retelling is the most realistic view of prison I have ever heard in my life. In his words, “A soul-crushing place,” ‘A hopeless situation.” Here’s the main reason to watch the documentary and learn from a tough guy’s experience; it doesn’t matter how tough you are; prison is a dead end.