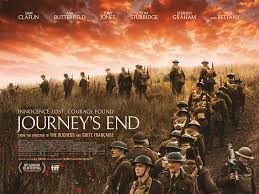 When one reflects back to WWI, images of soldiers fighting in trenches come to mind. Journey’s End, is a riveting account of those claustrophobic tight quarters along with the emotional tension soldiers and officers endured. With a setting near northern France, during a four-day period in March of 1918, C-company 12 men (2 officers and ten soldiers) await their orders to be called up to the front-line in those trenches awaiting the Germans to attack.

Audio Clip, Let’s Take a Listen: “We won’t last five minutes if the Germans attack,” says a soldier. An officer says, “You are to stay where you are for as long as you can.” A soldier says, “They’ve sent us here to die.”

Yes, this is all pretty bleak stuff, with the addition of a dramatic mournful score. However, it’s powerfully moving. The historical value of the film can’t be underscored enough. Based on R C Sherriff’s 1928 play, you can see how the narrative drives the story as Sheriff himself was on the front-line in WWI and survived to write about it.

Director Saul Dibb builds the unnerving situation by using the narrative to show us how the men are feeling about their life or death circumstances. We see the bravery and the courage it took to hold the line and fight. The addition of a young new soldier to the weary group provides the sharp contrast between the exhausted and the fresh-faced. All of the actors shine here with Bethany as a stand out.