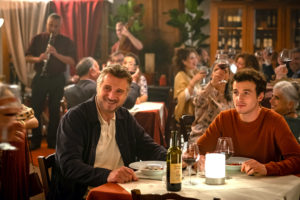 “Made in Italy” is a beautiful sun-quenched film that washes over you like a lovely summer breeze—filmed in the quaint, colorful village of Montecheelio in the Tuscany region of Italy. Micheál Richardson stars in the new film alongside his father, Liam Neeson. The film centers on a father and son’s estranged relationship due to a family death— in this case, a wife and a mother. In blending drama—I became misty-eyed in some of the scenes, with humor creates the perfect mix for an entertaining film. Micheál plays Jack, an art gallery dealer who persuades his dad, Robert, to sell his childhood home. 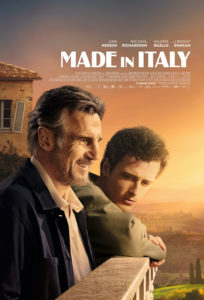 Writer-Director James D’arcy stated in the “Made in Italy” press notes that he was inspired to write the film while he was on holiday in Tuscany. At heart, he had envisioned a love story between a father and son and that by placing them in a foreign location that contained both secrets and memories for them; the hope is that they may begin to heal. Also, by setting the story in a beautiful place, such as Tuscany, they could dissolve the build-up anger–revealing their true love. 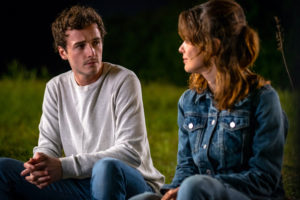 What strikes a chord with me and perhaps most that know of the circumstances surrounding Liam Neeson’s accidental death of his wife Natasha, who left behind two sons eleven years ago, is the uncanny similarity between the real-life actors and the film. Micheál, changed his last name to honor her a few years ago, as relayed to the world by his grandmother Vanessa Redgrave, of whom Micheál is very close. Speaking of Micheál, he’s been acting for about four years and hasn’t had a lead role until his dad, Liam, gave him a copy of the script. Both feel the screenplay is a fortuitous chance for them to work together and, by doing so, honoring Natasha.

Hi Carl, and hello to our Hollywood 360 listeners out there. Are you looking for a film that will take you to the gorgeous countryside of Tuscany, Italy?

How about a film that stars Liam Neeson and his real-life son Micheál Richardson? Tonight, I’m going to talk about “Made in Italy.”

I interviewed Micheál Richardson last week and asked him what it was like to star with his dad, here’s what he said: “It was my first lead role, so it was the most consistent I had worked in my life. And I had my dad with me the whole way and such a beautiful cast and crew. So I was lucky with my first experience.”

The script centers on a conflict between a father, Liam Neeson, Robert, a painter, and his son Me-Hall, Jack, who showcases artists’ in a British art gallery.

The Bottomline: I’m in 3½ stars out of 4. The fact that Liam Neeson and his son are playing characters that experience the same family devastating loss is captivating. Many of you know that Liam Neeson’s wife, Natasha died 11 years ago after a ski accident. Micheál changed his last name to honor her. Director James Darcy captured realistic and natural performances by both father and son.

The film is also comical, and the Tuscany hillside scenery, well it’s breathtaking! I really enjoyed this film!