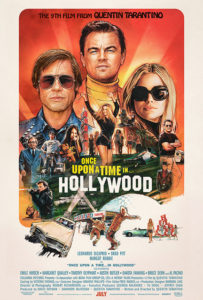 “Once Upon a Time…in Hollywood.” is writer and director Quentin Tarantino’s love letter to Hollywood filmmaking in the late 60s, along with his intense love of LA (which I share)—a bromance at heart between Pitt and DiCaprio, who garner Oscar-worthy performances—truly a spectacular enchanting, imaginative film! Within the first fifteen minutes, I was swept in by the meticulous recreation of vintage cars, neon set backdrops, hippie-chic clothing, pop-references and the breezy attitude—but most of all, the setting of the tone and vibe of the time through 60s music that blares from the radios, along with archival audio clips from Los Angeles’ KHJ Boss radio station.

Tarantino’s signature style, of pairing music to a scene whether it be Michael Madsen, (Mr. Blonde) in “Reservoir Dogs” (1992) dancing to “Stuck in the Middle with You” as he continues his gory torture, or Brad Pitt, (Cliff Booth), driving while “Treat Her Right” by Roy Head & The Traits is playing as he drives his boss Rick (Leonardo DiCaprio) to an appointment, and continues as Margo Robbie, (Sharon Tate) and her husband, Roman Polanski (Rafał Zawierucha) arrive at LAX. Tarantino, stated in a booklet accompanying his guide to his soundtracks, “When you take songs and put them in a sequence in a movie right, it’s about as cinematic a thing as you can do.”

Music is the core of all Tarantino films as he explains his process, “One of the things I do when I am starting a movie, when I’m writing a movie or when I have an idea for a film is, I go through my record collection and just start playing songs, trying to find the personality of the movie, find the spirit of the movie.” He continues, “Then boom, eventually I’ll hit one, two or three songs, or one song in particular: ‘Oh, this will be a great opening-credit song.'” In reading his quotes, an ah-ha moment occurred, perhaps, despite his signature over-the-top violent, bloody style—of which I am not a fan—the music elements of his films accurately define my appreciation of his genius. Personally, the “Once upon a Time…in Hollywood,” soundtrack has become my new all-time favorite.

Leonardo DiCaprio plays fictitious Rick Dulton a once-famous cowboy actor who’s fighting self-doubt, a fading career, and an uncontrollable drinking problem; his buddy is Cliff Booth (Brad Pitt), his stunt double, chauffeur, handyman, and house sitter. His hotheaded, short-fused nature is displayed with a zinger thrown in—we’re informed that he may have killed his wife. In a flashback of a quarrel, Cliff and his high-maintenance nagging wife are aboard a boat when she casually mentions that her sister’s name is Natalie, conjuring visions of Natalie Wood’s mysterious death. Rumors have tied Robert Wagner (Nathalie’s husband) to her death and here’s where the word sister comes into play, Nathalie Wood’s sister Lana has openly said that she thinks Robert Wagner killed Nathalie. In addition, we bear witness to Cliff’s stunt-guy fighting abilities; it’s instantly apparent his hands could also be registered as deadly weapons as he smashes an over caricaturized Bruce Lee (Mike Moh) into the side of a car door, severely denting the auto. By the end of the nearly three-hour run-time, we know both Rick and Cliff reasonably well, we watch them drive, eat, (making Mac n Cheese from a box), feed a well-trained good-sized dog slimy canned dog food, and view their reactions during tense situations.

The stunningly beautiful Margo Robbie’s entrance as Sharon Tate is a glamorous breath of fresh air, she’s living with director Roman Polanski, and they are coincidentally next-door neighbors to Rick Dalton on Cielo Drive of which Tarantino’s camera lingers on the green printed street sign at the base of the canyon road. Speaking of Benedict Canyon Rd—it is, a character in the movie—we ride along with all three characters up and down that road numerous times in the film. Near the beginning of Sharon’s introduction, she playfully skips out of the house wearing a gorgeous replication created by costume designer Arianne Phillips of the long snake-skin coat Sharon Tate wore to director Polanski’s “Rosemary’s Baby” premiere. Here, she’s excited about going to a party at the Playboy Mansion just 2.6 miles down the winding road. The on-site three-day shoot at the Mansion focused on the Hollywood stars that attended the parties, Steve McQueen, (Damien Lewis) and the Mama’s and the Papa’s to name-drop a few.

After the party scene, of which Robbie has little dialogue; her presence is shown as the entertaining party-guest go-go dancer having the time of her life. Next Robbie moves on to a poignant movie theater scene, in which she goes into the theater to watch “Wrecking Crew” a movie she’s in. She also stretches out her legs to place her bare street-worn feet upon the seat in front of her. Strange to some, but typical to a person who grew up in Los Angeles, California; I only wore shoes to school and church. The rest of the time I was barefoot, even when I skateboarded down the street to the local grocery store to buy bread every day, as I was the oldest of five children, the youngest being one year old, yes I cherished those days as a ten-year-old feeling free and helpful, that’s the LA vibe Tarantino is trying to portray.

In a recent interview with Entertainment Weekly, Tarantino is asked if the film is a valentine to the city of Los Angeles, his reply, “Yes, it is, I grew up in Los Angeles, and I love it, I love it the way that the only people who truly can love it or love it the right way are the people who grew up here and know it. Brad Pitt, immediately laughs and says, “That is not true,” No, that is definitely not true.” Tarantino said, “Okay, you can love it in your own way, but not the way Leo and I do.” His memories that are interjected into the film are of being a passenger in his parents’ car; mine too are of being a passenger driving up into the hills, the city or my favorite, spending a day at the beach.

One camera scene that changed my four-star review to a three and a half caused a strong adverse reaction; it occurs when Cliff is being seduced by a member of the Manson clan, Pussycat, (Margaret Qualley), the real-life daughter of Andie MacDowell is hitch-hiking back to the clan’s ranch. The camera angle lingers too long on the rear-end of her short-short cut off jeans, at one point it looks like a double is being used for the shot as her rear appears too high and distorted, although director Tarantino makes sure we know it’s her as he films her slowly standing from a bending position all in one take. In the current #metoo movement and respect for female image  exploitation, this blatant camera-work bothered me the most of anything in the film. Quentin, get with the program, #timesup!

Getting back to “Wrecking Crew,” what I did love about this sequence besides the true barefoot scene is seeing the real Sharon Tate on-screen. The tender moment of the back and forth camera between Robbie and the film—is perfection in my book. It’s been well-publicized that Robbie, has the blessing of Debra Tate, Sharon’s sister in her portrayal of Sharon, even loaning her Sharon’s jewelry to wear. For those of you that are too young to remember, Sharon Tate, she, along with her unborn child was brutally murdered in her home by members of the Charles Manson clan on August 8, 1969. This fact alone is a reason to be uneasy during the film, although what I can tell you is that the violence is toward the end of the film. Enough said, no spoilers here.

The bromance between Rick and Cliff continues, as it’s off to Italy to be the star of a “Spaghetti Western” instead of the villain, as Al Pacino ( Marvin Sharwzs), a producer delivers the hard truth to Rick. The Italian scenes are full of nostalgia as well, and an ode to the end of an era. By the time Rick and Cliff return to Hollywood, the time is approaching the ill-fated night in August. What I can tell you is that history is distorted, and for some unbeknownst reason, I felt both horror and joy by the time the ending credits began to role, no more can be said here as you’ll need to experience the Manson clan yourself all will have a slightly different reaction. Yes, it’s bloody violent, and I did have to look away in a few parts, which is typical for my viewing of horror. All and all, I’m anxious to see this film again, and no doubt will many, many, more times.

Bottom Line:  “Once Upon a Time…in Hollywood” is a love letter to Los Angeles and to the 60s era of filmmaking, Pitt and DiCaprio, garner Oscar-worthy performances—truly a spectacular enchanting, imaginative film told through the music of the 60s—Tarantino’s best work to date.