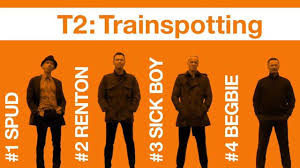 The Boys are Back!

Is revisiting the zaniness of Trainspotting (1996) 20 years later worth the trip? (Pun intended.) I guess if you’re wondering if Renton, Sick Boy, Spud, or Begbie made the decision to “choose life,” then yes− checking in with these wacky, cultish characters will totally be a rewarding experience. It’s especially worth the trip if all of the same players are back, including the esteemed British director, Danny Boyle, and in this case, yep–homerun−all are back in T2’s lively sequel. You can only imagine my elation when I discovered I’d be in London in February, a full eight weeks before the opening here in the USA. I viewed the film on my birthday, February 11, at the Empire Theater in Leicester Square, where the film opened on January 19. Yes, it was an excellent day.

Being a huge fan myself of the original film, I was extremely happy about the sequel. However, how does one follow a film that so creatively defined the essence of the Brit-Pop “20-somethings generation” or, in this case, the “Peter Pan 20-somethings”? Boyle’s unconventional sharp lens gave us a wild, frantic ride by using the music of the time, a script driven by rebellious ideology, and one with hardcore drug use as an underlying theme, no less. Seriously, if any film warrants a “stand alone” status, unquestionably, Trainspotting fits the bill.

Edinburgh does remain the setting in T2 (as it should), and it should also be noted that in 2004, Trainspotting was voted the best Scottish film of all time in a public poll. The film is ranked 10th by the British Film Institute (BFI) in the Top 100 British Films of all time. An impressive legacy indeed; it even demoted the inspirational Chariots of Fire (1986), which is best known for its opening scene of Olympic hopefuls running on the Scottish coastline of St. Andrews; the conditions are arduous, with wet sand and bare feet as waves break. Vangelis’ famous Academy Award-winning score “Tides” plays in the background as the runners glide in slow motion. In contrast, Trainspotting’s opening scene includes frenzied running at hyper-speed down Princess Street in Edinburgh by Ewan McGregor (Renton) and Ewen Bremner (Spud) while being chased by security guards just after robbing John Menzies Bookstore while Iggy Pop’s “Lust for Life” blares on. 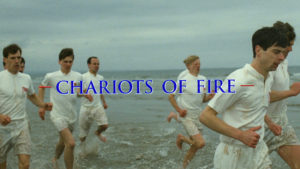 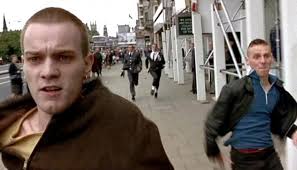 T2’s opening scene views Renton running again, but this time on a treadmill in Amsterdam. Evidently, he’s surrendered to “life,” as he’s chosen to run artificially. Within minutes, in a hysterical scene, he clumsily falls off. There’s a re-visit to the original chase scene by Renton, and just like that, we are off to the races again.

The theme is all too clear in the beginning of the film−addiction. Renton counsels Spud on the premise that he needs to become addicted to “anything” but drugs, say, boxing or running, for example. Next, in another comical scene, Spud tries desperately to box while a Raging Bull dramatization plays out.

T2 is uproariously funny, from the opening scene to the zany re-visiting all of the old gang. The idiosyncrasies of each guy are accentuated, which adds to the lunacy of tone. As they say, just fasten your seatbelt and enjoy the ride!

Sick Boy’s secluded money-pit pub, the Port Sunshine that he inherited from an aunt, has created a disparaging weight for him to carry. He still uses drugs as a means of escape from his disparity. Although he hasn’t stopped conning or scheming−now he’s into hiring his girlfriend to meet up with unsuspecting dignitaries in a call-girl situation, which quickly turns to blackmail.

The boys all have one thing in common; they are extremely unhappy with Renton for swindling their money twenty years ago, with jailbird Begbie (Robert Carlyle) especially pissed off. He’s not happy with simple compensation–nope, he wants another form of revenge−death. Thus begins the journey of how that money will be repaid by Renton, all while he is being hunted by Begbie.

As you can imagine, a myriad of familiar situations occurs just as before in dark, dingy nightclubs, seedy disgusting bathrooms, grungy hotel rooms, and train stations, with the music of Lou Reed, Blondie, a remix of Queen’s “Radio Gaga,” Run D.M.C., and Frankie Goes to Hollywood. Kelly MacDonald (Boardwalk Empire), who played Renton’s underage love interest Diane, returns in what feels like a cameo. She has very limited screen-time; however, it is refreshing to see her.

In the film, we are finally informed about what the word “trainspotting” actually means. It’s a term used by people in Britain to take a look at train cars while noting their differences. It can involve counting them as well. Can you say ultimate boredom? Some have speculated on fan blogs that the correlation between the tracks of a train to the track marks on the arm of a heroin junkie are a term for “trainspotting,” as in spotting a user. Whatever the meaning, the film’s definition illuminated its core.

Solid in narrative, jokes, visual effects, random running comments and visuals, metaphors, and flashbacks all make T2 a hit. Boyle is a master filmmaker; here, he shows us his heart and soul. No other director has his highly creative, energetic, and engaging style; he’s one in a million. I was fortunate enough to meet and interview him in 2010 for his film 127 Hours; he is highly personable and enthusiastic, just as you may have guessed.

My favorite scene in T2 is the ending. I don’t want to give away too much, but it all encompasses Renton by himself with incredible artistic camera work and lingering visuals that will stay with you a very long time.

Bottom line: See T2, especially if you are a fan of the original film, but also see it because it is made by a master filmmaker at the top of his game. Thoroughly engaging, comical, and entertaining.