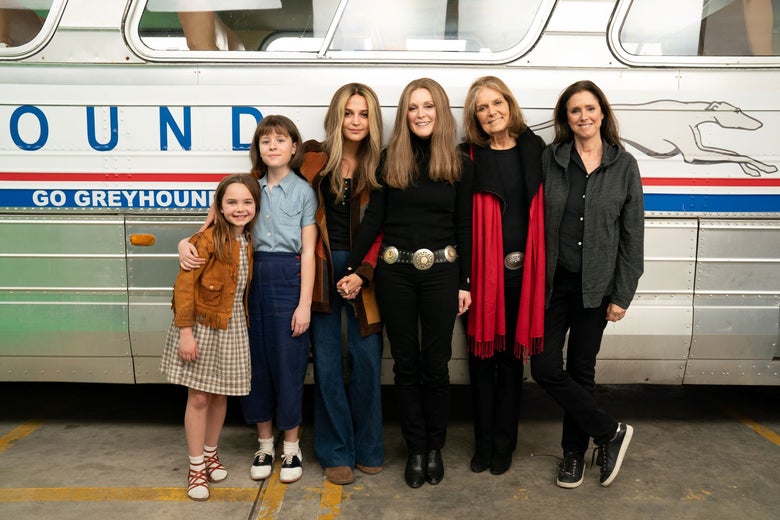 Hi Carl, tonight I’ll review a series and a movie that you can watch online: First Up, “The Glorias” is a movie streaming now on Amazon Prime.

It’s based on Gloria Steinem’s biography, “My Life on the Road.” What’s great about the film is the artsy director Julie Taymor, remember of the stage presentation of “The Lion King?”
Here we are given four Glorias, from childhood through adulthood, Julianne Moore and Alicia Vikander play the older Glorias— Ryan Kiera Armstrong, Lulu Wilson play the younger Glorias. Though, what’s fascinating: the Gloria actors all interact with one another at various moments in the film. They discuss past experiences; they analyze regrets from childhood to the battles Steinem endured while fighting for equality, concluding with the Women’s March in 2017.

She grew up all over because of her unconventional, antique dealer father, played by Timothy Hutton. Through her journey, we’re given an understated examination of Steinem, her motivations, and what she points of contention while fighting what should have been a societal norm. Each actor in the role is given their moment to shine as Steinem faces the fact she is not a woman of the times. She possesses her own goals – thankfully nurtured by her parents no matter how dysfunctional her life.

Wow, what a refreshing in-depth view of a courageous woman; I loved this movie—four stars out of four.

Thanks so much for listening in tonight; as a reminder, I’m in my 14th year as a film critic and a voting member of the Critics’ Choice Awards in LA. Check out my reviews on interviews on Sarah’s Backstage Pass.com. See you next week

Check out the podcast on Hollywood 360 Radio Network: http://www.hollywood360radio.com/emily-in-paris-and-the-glorias/