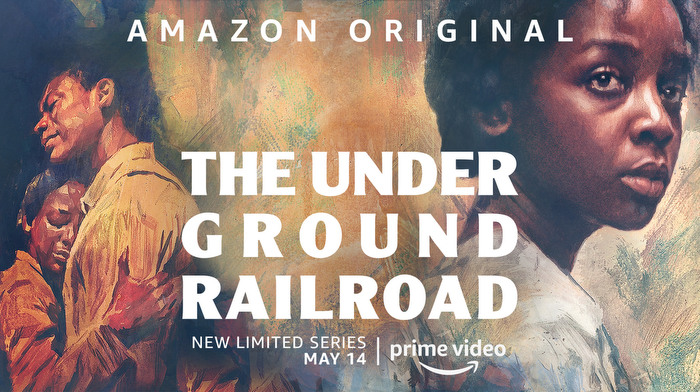 The apprehension of viewing a feature film, let alone a 10-part Episodic series on the topic of slavery in America’s antebellum south for most people can be compared to a non-swimmer jumping into a deep pool of water. Most know the horrific narrative due to home or school viewing of the award-winning 1977 TV series “Roots” based on Alex Haley’s novel “Roots: The Saga of the American Family,” LeVar Burton was 19 years old when he joined the cast as the leading role. My recollection of sitting in a Toronto grand movie theater during the Toronto International Film festival in 2019, waiting to view the film “Harriet,” still brings chills. “Amistad,” “Birth of a Nation,” “12 Years a Slave,” “Antebellum,” and “Django Unchained” are all worth a view—one may ask, what’s new to learn? Here’s encouraging news –you can rely on trustworthy film and TV critics—they test the conditions by informing you if it’s worth jumping into the deep end. As a 14-year critic, my suggestion is yes, absolutely take the plunge into Academy Award-winning filmmaker Barry Jenkins’s excellent Amazon series “The Underground Railroad,” as the series is unlike anything I’ve seen thus far on the topic—although I caution you to tread lightly.

Jenkins adapted his screenplay from Colson Whitehead’s Pulitzer Prize-winning 2016 novel of the same name that begins in antebellum Georgia in 1850, eleven years before the start of the Civil War in 1861. South Carolina, North Carolina, Tennessee, and Indiana are also featured states. In reading Barry Jenkins’s journey towards making the series, his personal goals included writing and filming a feature on slavery depicting the ‘Underground Railroad,’ just as he had imagined it as a child, an actual train that carried passengers to freedom. Whitehead’s novel is a perfect fit as the fantasy underground tracks, stations, conductors in uniforms are visually recreated dreamily. Jenkins wrestled with hesitations concerning writing his script, although he thought if he didn’t, who would and when. How does one change the slave narrative along with the ‘gaze’ we’ve become accustomed to all these years?

After viewing all episodes, my reaction is that it’s about time we have a historical look at slavery that breathes life, hope, and dreams into the humans that suffered through the wretchedness. The focus is now shifted to re-humanizing people so that we can all see clearly their plight, which as humans, is ‘our’ plight. Children are woven throughout the series to drive home the point of family. What do you do in these conditions to shelter, protect, and nurture your family? Jenkins makes sure we see glimpses of a hopeful father sewing a toy, a guiding mother teaching her child, a loving grandmother giving advice. Even more profound are the visuals of a slave reading “Gulliver Travels” aloud, a slave child writing in her diary, or Cora, the main star of the series questioning whether teaching slave children to simply recite long passages with large words is as important as teaching those children the meaning of those words and their implications.

The series is both absorbingly beautiful and disturbingly violent, yet most of the horrific violence is in the first Episode. Jenkins doesn’t sugar-coat these events described in the book source material, yet, I can assure all, we are spared some of the extraneous details, as I’ve read the book. The main characters are mesmerizing while believable. Cora, Thuso Mbedu, a South African actress, has the central storyline throughout the series. Caesar, Aaron Pierre, a slave from Virginia, can read; he’s Cora’s friend who guides her to flee Georgia as they ride the fantasy railroad to freedom. Ridgeway, Joel Edgerton is the bounty hunter who never gives up trying to find Cora—as her mother, Mabel, is the only slave he didn’t bring back. Homer, Chase W. Dillon is an 11-year-old boy, Ridgeway’s companion, and sidekick.

Do not try and binge-watch, as the series is too heavy for that; take your time to learn and reflect. You may want to follow Oprah’s lead as she posted to her Instagram account; after viewing an episode, she takes a break, has a cup of tea or a glass of wine, and rocks in her rocking chair to unwind.

There are so many elements to champion in the series, although I’d be remiss if the musical score collaboration between Barry Jenkins and composer Nicholas Britell weren’t addressed, especially after attending their SXSW seminar on March 16, 2021. They chatted about their past musical work together while focusing on creating the score for “The Underground Railroad.”

Their inspirations came from day-to-day interactions with sounds; a drill, in particular, became the source. “They started up their drill, and this is like 300 yards away, but I could feel the vibration through the earth, and it felt like a rhythm,” Jenkins said.
Britell said, “I was like ‘OK, this is awesome. Because right away I took that drilling and I started experimenting with this idea of the ground and going downward.”

“It’s like on ‘Beale Street,’ the concept of ‘How do you create the feeling of injustice?’ It’s by harming that feeling of love and doing that with music. On ‘Underground Railroad,’ there were a lot of moments where we took it even a step further. I feel like on each project; we learn something,” Britell said.

The duo’s concept for “The Underground Railroad” is reversing pieces that appear earlier in the show. A piano piece called “Floating” that appears in the introduction of Cora, for example, is reversed in another moment of the show.

The memorable cast steps up, providing credible performances. Jackson Harper plays Royal, a railroad officer, and a cowboy who’s smitten with Cora. Their romance is a breath of fresh air, offering tenderness and love that Cora has never felt. We’ve been with her on her journey—we see the change in her willingness to open up, bringing hope that she’ll find joy in life. Jenkins brilliantly paces their scenes gingerly, providing time for us to revel in the beauty of their passion.

Nearly three Episodes are devoted to Edgerton’s backstory, the cold-hearted slave catcher. Jenkins shows us his young adult scenes with his unyielding father and a household-favored slave, played excellently by IronE Singleton. The flashbacks are telling as Ridgeway is driven by jealousy and his own self-worth to succeed as a slave-catcher, as in his mind, he never measured up to his father’s expectations. A note on the multi-talented Australian actor, writer, director Joel Edgerton’s performance, one word, riveting.

An observation regarding Cora’s Episode filmed mainly in an attic parallels Anne Frank’s hiding during the Holocaust and depicts the psychological effects of enslavement. According to the Smithsonian May 2021 article, in the attic Cora is free from violence and chains, yet she lives in a space where she can barely stand with no fresh air, no running through the grasses, no warmth of sunshine. Jenkins portrays the psychological toll of slavery instead of only depicting the physical abuse endured by enslavement. She’s sheltered by an abolitionist who risked his life and that of his family to support the cause. Slave history includes white and black people who believed in the cause of freedom for all, so much so they sheltered slaves, gave them food and clothing, and were the conductors of the underground railroad.

My personal reaction to the series was immediate, as I’m a direct descendent of a drummer boy who volunteered to serve in the Civil War from Wisconsin for the Union Army. My relative, Frank Pettis enlisted at 11-years of age with his father, who played the fife, along with his 5th-grade teacher in 1862—they served three years until the war ended in 1865. Can you imagine your children being asked at school to raise their hand if they’d like to travel to the front lines of the war with their teacher? Can you imagine a child in America being forbidden to read and write, nonetheless, the countless atrocities that occurred in our American slave history?

Thank you, Barry Jenkins, for humanizing the gaze of slavery and for reminding us of the people who did help, who put their family in harms way in order to devote their lives to this cause. In my mind, your four-and-a-half-year project is nothing short of a masterpiece.