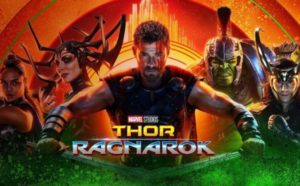 This is the third in its series, with Thor premiering in 2011 and Thor: The Dark World in 2013. Chris Hemsworth stars in all three films.

In Ragnarok Thor is imprisoned on the other side of the universe without the strength of his magical hammer. His main purpose is to get back to Asgard to stop Ragnarok, which will cause the destruction of his home and its entire civilization.

Who knew that Thor’s older sister, the exiled Hela played by black-antlered thorn wearing (Cate Blanchett) would return to Asgard. Let alone that she plans to take over the nine realms and destroy the universe. She’s excellent in all her evilness and fun to watch.

I enjoyed the banter between The Hulk/Bruce Banner (Mark Ruffalo) and Chris Hemsworth. Their scenes together really make this movie great.

The action scenes are impressive, although loyal viewers are finding these super-charged scenes a bit boring as it’s all been done previously. The savior here is in the story-lines of Thor and his rival brother Loki and the friendship (bromance) between Thor and The Hulk.

The Bottom-Line? I’m in, the script is great due to the creative comedy that’s been added in all the right places. This isn’t Deadpool, but close. It is the perfect popcorn movie that’s full of entertainment and great special effects…if you still care about those.

New Zealand director Taika Waititi is at the helm, with screen writer Michael Green. Together they are a winning combination for sure!