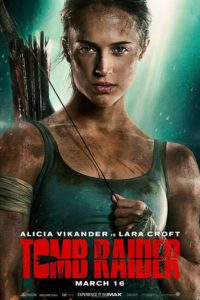 Tomb Raider (PG-13) stars Swedish actress Alicia Vikander it’s the remake of Laura Croft -Tomb Raider that starred Angelia Jolie in 2001. Both are based on a popular video game.

In the new version, Croft hasn’t accepted any of her wealthy father’s (Dominic West) inheritance after his 7-year disappearance, as that would mean she has acknowledged his death. She works as a bicycle delivery courier in London’s East Side, however, the film starts in a warehouse gym where’s she’s kickboxing an ultra-strong opponent. We view her training and know that she can fight if she had too.

Audio Clip, Let’s Take a Listen: Dad speaking, “Hello Sprout, if you’re listening to this then I must be dead. I found something a tomb called the Mother of Death. If Trinity succeeds, our world is in danger. Promise me you will stop them.” Lara replies to softly go herself, “I promise.”

Upon hearing this tape, Lara swings into action, and before she can pack her backpack, she’s off to Hong Kong. The film would not be worth watching without Vikander, who darts, leaps, and thrashes her way through this lack-luster re-boot with engaging fierceness. You just wish she had been matched up with a villain that displayed a fourth of her action skills.

Audio Clip: Lara, “I think I know where my dad went.” “That’s right in the middle of the Devil’s Sea,” answers a sailor played by (Daniel Wu). “It will be an adventure,” Lara says. Sailor says, “Death is not an adventure.”

The Bottom Line? ‘I’m Out’ two and a half stars out of four.

Vikander is perfect as Lara Croft, and I did appreciate her performance in this physically challenging role. My favorite line is when Lara’s dad says to her, “I underestimated how brave you are.” My hope is that filmmakers will take note of the problems in the film and construct a sequel that is better than the first.

The villain here played by (Walton Goggins) is life-less in his portrayal. He’s a psycho that enjoys sadistically kicking people in the head with his boots on while he sneers his face. His violent scenes are over-the-top, while not moving the story forward. He bullies Lara by taunting her and does the same to her father. Press the yawn button−boring.

The film needs to be edited at least 20 more minutes. It plays like a video game, one unrealistic stunt after another; yet, we aren’t invested enough, due to the lack of a cohesive storyline. Many of the scenes inside the tomb drag and there are too many flash-backs between Lara as a child with her father. All this plays more like a mishmash of little substance. How can we relate to any of the characters if we don’t know their backstory? How can we relate when there are so many extraneous action scenes. During a preposterous action point in the film, Lara Croft’s character stops the action looks at the audience and says, “Really?” All I can say is, “Game Over.”