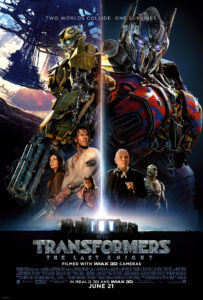 The Last Knight has a ridiculous, far-fetched story, one that attempts to have us believe that magic stems from alien power and that King Arthur and the Knights of the Round Table weren’t alone as heroes. It seems there were 12 transformers that stood behind them at the round table. Who knew? A convoluted storyline includes Professor Vivian Wembley as the direct descendant of the mythical Merlin the Wizard. Hmm… did they locate that information on Ancestry.com?

Honestly, the over-stuffed story-line begins and ends in an ear-piercing battle, and I really didn’t care much about why they were all fighting, nor will you. By the two-hour mark, I was exhausted from the “location whiplash,” and couldn’t even tell you how they ended up in submarines looking for a lost alien ship, unless wait—maybe that was a reason for Mark Wahlberg to wear a tank top inscribed H. M. S. and show his cut abs to Professor Wembley and all of us. Okay, now I totally get the reasoning for the hot, steamy underwater environment. Cheesy again.

The Bottom-Line? Do not take kids under 13 to this film. Fans of the franchise know what they are in for.