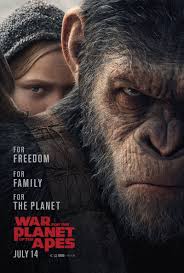 Yes, I know war is hell, but what happened to the humans here? Why don’t we see one single soldier show any sign of compassion for the apes? And yes, I also know there’s a mute, sweet, young doll-carrying little girl, but she’s in no position to symbolically help the apes. We can also surmise that she represents the last hope for humanity. I held out for hope. Hope that Gabriel Chavarria’s (Preacher) soldier character would step up to the plate. Nope, not a chance. Even though the apes spare his life, he offers no aid, not even a small nuance of humanity. Truly, this is a big mistake as the prior films show humans empathizing with the apes’ cause to the extent of some trying to work toward peace.

So why should you even bother to see the third film? Because, simply put, it has exceptional acting by motion capture artists Andy Serkis as Caesar the apes’ leader, Karin Konoval as Maurice the gentle orangutan or The BFG (Big Friendly Giant), and Steve Kahn as Bad Ape, a new character to the series. Not to mention the breathtaking cinematography and the sweeping set design along with the all-encompassing musical score. Make no mistake; this is filmmaking at its best in all other aspects with the exception of an uneven script, which for me is a huge piece of the whole. I’m recommending you see War in the theater, as it demands a big screen, which I promise you won’t regret.

The story picks up two years after Dawn by declaring that it’s been 15 years since intelligent apes were scientifically created. Human soldiers led by Woody Harrelson (The Colonel) are marching somewhat uphill in a grass-filled treed land similar to a Vietnam War scene out of Apocalypse Now (1979). The soldiers are tense, wearing green camouflage army uniforms and combat paint, with names on their helmets similar to the war film Full Metal Jacket (1987), such as “Endangered Species,” “Monkey Killer,” and “Bedtime for Bonzo.”

The soldiers advance and attack the apes, fighting with steady aggression and militancy, which overpowers them, killing many. Caesar becomes enraged when his wife and son are killed and embarks on a personal journey for revenge. He’s determined to go, even if it means sacrificing himself. But of course his posse − including Maurice − doesn’t let him go on his own in good conscience.

Their travel scenes showcase the majestic snow-capped mountains and treacherous terrain; again, the cinematography is breathtaking. Eventually, they find a young mute girl (Amiah Miller), who Maurice compassionately pleads must come with them or she will die.

They find yet another comrade, “Bad Ape,” which adds moments of comedic relief, only to be shattered with sorrow as we hear his horror story of the Sierra zoo/prison where he was held by the humans and named “Bad Ape.” Shortly, they head directly towards “the lion’s den,” the “ape prison,” where apes are tortured, mutilated, degraded, and forced to work as slaves without food or water. You’ll view all of that and worse in the last third of the film; Caesar bears the brunt of the humility and brutality. Viewer beware: if you have any aversions to viewing animals suffering or being tortured, then I say skip the film, as there’s so much of it, I can’t even recommend an isolated section you could avoid.

With that being said, Woody Harrelson’s “Gonzo” colonel character is reminiscent of Marlon Brando’s Colonel Kurtz in Apocalypse Now; brooding, evil renegade. Caesar wants him dead, and by this time in the film, we are so entrenched with the apes’ side, we want him dead. Harrelson’s acting is strong here, and he’s always fun to watch. There’s an ode to Apocalypse Now, as “Ape-Pocalypse Now” is written on the wall of an underground cave. 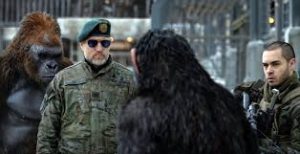 I never give a film’s ending away, and in this case, it’s no different. What I will tell you is there’s no surprise as in the original film, Planet of the Apes (1968). Nope, no shocker as in Charlton Heston’s classic beach shore horseback ride only to discover the Statue of Liberty half buried. What I will tell you is that I felt saddened by War’s ending and it was also rather blah.

The Bottom-Line? War for the Planet of the Apes is exceptional filmmaking; the “Gorilla in the room” is clearly the disappointing lopsided script and the uneven character choices. The exceptional acting, set design, cinematography, and musical score are well worth a visit to the theater. War is hell, and you’ll find yourself immersed in it right along with the apes.