Fittingly, this modern-day tale of  ‘Men are from Mars, Women are from Venus’ mentality shines a spotlight on the male-dominated workplace and women’s struggles in general to even the playing field. In this hilarious slapstick comedy starring a magnificent Taraji P. Henson, you’ll find satisfying components of sisterhood, family, romance, and the workplace. There’s no need to brush up on the 2000 film, “What Women Want,” with Mel Gibson and Helen Hunt as Nancy Meyer’s script bears little resemblance to the broader topics conveyed here—mainly sexism and racism.  Directed by Adam Shankman (‘Bringing Down the House’) with a screenplay by Tina Gordon Peter Huyck and Alex Gregory. 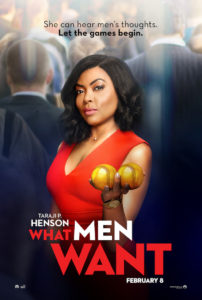 Ali Davis (Taraji P. Henson) is a hard-hitting female sports agent with clear goals to succeed in her current company domineered by arrogant, less-competent men. She’s unfairly passed over for a promotion, experiencing a humiliation familiar to many women—told by her boss, Nick (Brian Bosworth) to “stay in her lane” and that she is not “entitled” to anything. No, the rules are not equally applied to her, as a black woman, she must work twice as hard for half the results. Raised by a single father (Richard Roundtree) who owns and operates the local boxing gym—Ali, named after the great heavyweight champ Muhammad Ali—was raised to go through life with her fists up. We see a determined Ali venting her woes while sparing in the ring with her dad. It’s a great scene as dad offers advice, while Ali is comforted—but only for the moment, as we clearly see an unwavering commitment to charge forward and not to give up.

In what starts as a lackluster bachelorette party with the bride-to-be Mari (Tamala Jones), born-again Olivia (Wendi McLendon-Covey) and Ciarra (Phoebe Robinson), a one-track-mind Ali confides her men troubles to real life celebrity psychic (Erykah Badu), named Sister in the film. She’s given tea laced with weed, peyote and crack, and sure enough a dazed and confused Ali falls and hits her head ending up in the emergency room with a male doctor whom—eerily she can read his inner thoughts.

Armed with what should be a for sure life raft, Ali uses her new abilities to find out what men are privately thinking. This proves to help Ali understand a man’s world while gaining inside information in signing a key client. What she didn’t bargain for, are the thoughts she’d hear men saying about her. In two completely different romantic situations, of course, Ali uses the newfound information to her advantage—the results are both hilarious and surprising.

In her dealings with an overbearing father and manager, Joe “Dolla” Barry, (Tracey Morgan) who supervises every aspect of his sought after ‘number one draft pick’ son Jamal’s life, Ali uses her thought-reading powers to find out the key to signing Jamal—after that it’s off to the races.

‘What Men Want’ works best when it stays on course, not veering too far from the main plot and focusing on Ali. At times the film does feel uneven, as it’s busy with irrelevant subplots that are too messy. Henson carries the film from start to finish and is impressive. Not only is her comedic timing impeccable, she hits all forms of humor from the exceedingly physical, to the cynical, to the raunchy jokes that mimic a boy’s locker-room tone. Yep, she nailed it!

To continue singing Henson’s praises, she’s a natural in this complex role. Ali is selfish, goal-driven with a short temper and a control freak mentality, yes she has flaws, which I applaud in the script as her characteristics serve normalcy that is needed to become believable. She’s not your typical ‘climb the ladder gal who gets everything she wants by using her sexy charm and female guise—nope, she plays it like a man—and it’s refreshing.

The Bottom-line: A wildly entertaining look at gender and racial discrimination with lessons of stepping back, finding your center and fighting for what is rightfully yours.