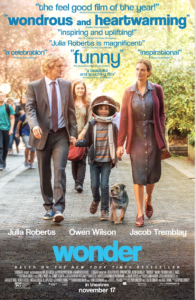 Wonder is a drama/comedy based on R.J. Palacio’s best selling book of the same name. The film as the book, tells the story of August (Auggie) Pullman, played by Jacob Tremblay, a good-natured, funny and smart, 10-year-old boy, who was born with noticeable facial deformities — a “craniofacial difference” caused by a variance in his DNA.

The director is Stephen Chbosky author and writer of Perks of Being a Wallflower 2012 and written by Steve Conrad. I interviewed Chbosky for his work on Perks in October of 2012.

Julia Roberts, an avid fan of Palacio’s book stars as Auggie’s mom, Isabel and Owen Wilson stars as the dad, Nate. Auggie’s been in and out of hospitals for years, enduring 27 surgeries allowing him to breathe, see, and hear without a hearing aid. As a result, he’s been home-schooled by his mom all his life; the film picks up just as the family is making the transition to sending him to elementary school. After all, Auggie has had to endure, we see him face his toughest battles yet. With encouragement from mom, dad, and his sister, we see the difficulties he has adjusting due to his facial looks. This, in turn, leads to bullying, which for Auggie is a constant struggle.

The story is told through individual narratives of the main characters through their voiceover; this builds the story by adding their inner thoughts.

Jacob’s prosthetic makeup was designed and created by Arjen Tuiten, which took over an hour to apply. He’s wearing a skull cap with prosthetic ears attached, a facial prosthetic that covers his face, and a wig. He’s barely recognizable as the little guy who won us over with is screen presence in the film, Room (2015).

The Bottom-Line? A must-see beautiful, graceful film for all ages—you can’t help but be touched by Auggie’s courage and the courage of his family. You will shed a tear or two, as this inspirable story tugs at all the right heartstrings. There are plenty of comical moments to lighten the heavy script and the inspirational quotes through out are good reminders for everyone.

Julia Roberts is lovely to watch as Auggie’s mom, you feel her pain, and sense of heartbreak and you’ll see her joy.

Here are a few quotes from the film:
“Here’s what I think: the only reason I’m not ordinary is that no one else sees me that way.”

“I wish every day could be Halloween. We could all wear masks all the time. Then we could walk around and get to know each other before we got to see what we looked like under the masks.”

“I think there should be a rule that everyone in the world should get a standing ovation at least once in their lives.”

“Courage. Kindness. Friendship. Character. These are the qualities that define us as human beings, and propel us, on occasion, to greatness.”