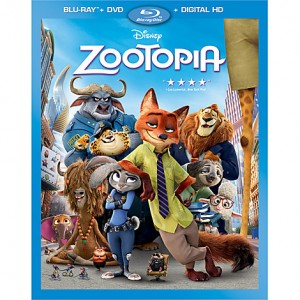 Zootopia is one of Disney’s best films to date and my favorite film of the year so far. It’s family friendly and teaches kids so many great life lessons. It’s now available on DVD and digital formats. I’ve looked at all of the bonus features and can highly recommend adding Zootopia to your personal library.

Be in the know in less than 2 minutes! Take a listen to my 4-star review:

“Try Everything” Music Video by Shakira. Video includes scenes from the movie, focusing on the lyrics. This is my favorite bonus feature, as the song is catchy, uplifting, and has a great message for kids. The run time: 3:21 seconds. Here’s a sample of some of the lyrics.

I messed up tonight

I lost another fight

Lost to myself but I’ll just start again

I keep falling down  I keep on hitting the ground

But I always get up now to see what’s next

Birds don’t just fly they fall down and get up

Nobody learns without getting it wrong

I won’t give up

No I won’t give in till I reach the end, and then I’ll start again

No I won’t leave I want to try everything

I want to try even though I could fail

I won’t give up

No I won’t give in till I reach the end, and then I’ll start again

Scoretopia – (5 minutes 2 seconds) Academy-Award-winning composer, Michael Giacchino spotlights five of cinema’s greatest percussionists and how they brought a natural, animalistic sound to his spot-on music score.
Giacchino is quoted as saying, “Musicians really are like actors because we give them lines and they interpret them. Also needed are certain sounds to enhance emotions.”

Research: A True-Life Adventure – (9 minutes 58 seconds). The filmmakers traveled the globe to not only study animals’ habitats but also to find out what characteristics make a particular animal unique to itself. They also studied how animals live with one another. Disney Animal Kingdom theme park was the first stop and then the African savanna. Artists are seen sketching the animals’ behaviors to shape the Zootopia animals.

The Origin of an Animal Tale – (9 minutes 16 seconds). Follows the story’s development from its origins to a shift in that story that changed the entire film. The fox was initially the main character, which in time switched to the bunny. Tells of the nature between predators and prey, with the addition of why these changes were made.

Zoology: The Roundtables – Includes three sections: characters (5 Minutes 49 seconds), environments (5 minutes 44 seconds), and animation (6 minutes and 52 seconds). Ginnifer Goodwin hosts an in-depth look at the movie’s characters, animation, environments, and more. The artists at Disney Animation discuss the different habitats in the world of Zootopia and the labor-intensive details of the animals’ fur. In all, they brought 64 species to life.

Alternate Opening – Young Judy Hopps rescues a fellow classmate, which plants the idea that perhaps she could have a life in law enforcement.

Alternate Homesick Hopps – After a frustrating first day on the force, Judy has a conversation with her parents. This scene shows the changes for the one shown in the film.

Alternate Jumbo Pop – Shows a change as Nick was no longer the lead character.

Hopps’ Apartment – When Judy’s entire family pays her a surprise visit, they are shocked to discover the company she’s keeping.

The Taming Party – A scene from the original idea of prey and predators.