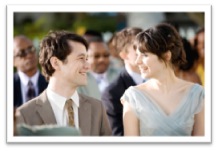 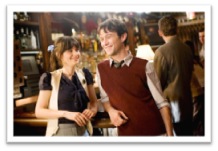 Summer (Zooey Deschanel) stars in this heart-wrenching story about what it feels like to be in love and how it essentially feels to be ‘dumped.’  The title, “500 days of Summer” refers to Tom’s (Joseph Gordon-Levitt) emotional journey centering on his ‘head-over-heels’ attraction to co-worker, Summer and his 500 days with her.

The narrator warns us, “This is not a love story!” I’d have to disagree somewhat, as poor Tom is definitely in love. After dating Summer for a couple of months, she declares that she ‘just wants to be friends.’ As a result, he can’t sleep, he’s walking to the neighborhood grocery store in is robe buying bottles of Jack Daniels, his performance at work is off and he’s simply miserable to be around. Even a date with a redheaded hottie turned into a comparison match regarding his long lost, Summer. Most of the film is about love and the heartache that follows when you are the only one whose heart is going ‘pitter-patter’ in the relationship.

In some ways, this film could be a classic example of role reversal, as most of us are familiar with break-up, chick flick films where after being dumped, the girl rents sad love story movies, eats ice cream (out of the carton), sobs with her girlfriends and eventually moves on. Tom enlists the help of his friends during his heartbreaking times, but they don’t really understand his pain. He seeks advice from his soccer- playing little sister played by Chloe Moretz. She becomes exasperated by his antics and tells him to stop being such a whimp and move on.

The film cleverly jumps back and forth between the different days in the relationship. Day 40 is the day we view the couple at IKEA as they are romping through the store and being silly. Summer does tell Tom rather directly, “I’m not looking for anything serious.” This should have been Tom’s clue to run and run far away. Instead, he takes her to his favorite scenic spot in the city and draws the LA cityscape on her arm with a marker.  Only this drawing is the way in which Tom feels the buildings should be placed. This is a very tender moment as Summer is constantly encouraging Tom to go back to the profession he loves which is architecture. There are other moments when Summer brings this point up that seem more like a dig than encouragement.

As Tom rethinks all of the times and little moments in their relationship after the break-up, he does start to see that it was one-sided. He also sees that Summer was leading him on and that she was merely playing with his emotions at times to meet her own needs. At one point, he confronts her and says, “Why did you dance with me when you knew you had feelings for someone else?” She states, “Because I wanted to.” Deschanel usually plays the darling character that is sweet as honey. Not in this one. Her character is hard to like as she is most definitely the selfish one.

I enjoyed the performances but thought the script, at times, wasn’t believable.