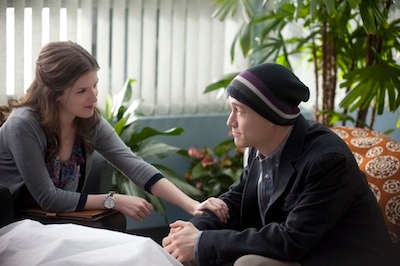 ANNA KENDRICK and JOSEPH GORDON-LEVITT star in 50/50. Photo Credit: Chris Helcermanas-Benge © 2011 Summit Entertainment, LLC. All Rights Reserved.
Odds Favor This Touching Film One might expect a movie featuring Seth Rogen (“Pineapple Express” 2008) to be an uproarious comedy, but for “50/50,” Rogen has veered from his norm. Although it does include many laughable moments, the humor in this dark comedy is not what gives the emotional story it’s backbone. At first glance, a film about cancer may not seem like one that would be high on your list; however, the honesty and heart of “50/50” is just too powerful to ignore. Will Reiser (a friend of Rogen’s) wrote the screenplay, which is based on his own experience with cancer at the tender age of twenty-something. Some might wonder how a cancer survivor finds humor in such a harrowing experience. In Summit Entertainment’s production notes, Reiser is quoted as saying, “I like the idea that this movie allows people to talk about their experiences with cancer and not be afraid of that. I think it’s okay for us to laugh at illness and how absurd it is, and it’s also okay to cry.” We can all be thankful for Reiser’s viewpoint and that Joseph Gordon-Levitt (“Inception” 2010) was cast as Adam, the young man in the film who learns of a malignant tumor growing along his spine, one that gives him a 50/50 chance of survival. Gordon-Levitt’s performance is captivating. As Adam tries to manage the devastating news and all that follows, Gordon-Levitt consistently evokes just the right emotion at just the right moment. The film doesn’t provide any fancy footwork with camera angles and such, and in this case, that’s a good thing. Instead, director Jonathan Levine (“The Wackness” 2008) focuses on the fine cast of actors in this character driven story. Joining Rogen (as Adam’s best friend, Kyle) in the supporting cast is Anna Kendrick, who wowed audiences in “Up in the Air” (2009). She shines again here as Katherine, the therapist in training who is having a difficult time navigating the crucial issues of her third patient, Adam. Adam seeks additional support from his artsy girlfriend, Bryce Dallas Howard (“The Help” 2011), and Kyle, who seems to have a one-track mind. The one person he doesn’t want to accept help from is his mother, Diane. Academy Award® winner Anjelica Huston (“Prizzi’s Honor” 1985) is perfectly cast in this role. While her husband suffers from Alzheimer’s, Diane is hurt when Adam will not return her calls. When she meets Adam’s therapist she tells her, “I want you to know, I smother him because I love him.” Huston’s performance as the overbearing mom makes us simultaneously laugh at and sympathize with the character. As Adam’s emotions begin to run deeper, the second half of “50/50” is more powerful than the first, building at a steady pace to a worthy climax. Again, Gordon-Levitt hits all the right notes, which could not have been easy in this sensitive role. His performance made this film more poignant than I had expected it to be. The one complaint I have is the excessive vulgar dialogue. I understand that, in fact, many guys do talk this way to each other, and maybe it’s an attempt to make the movie more realistic; or, it’s simply a cheap effort for laughs, as with so many of the raunchy comedies in today’s world. If that’s the case, there was no need for it as there is plenty of other less offensive humor in the movie. Bottom Line: A heart wrenching story, lightened with humor, Reiser and Levine have successfully turned out an honest, touching film about a delicate subject matter. Tyna S. Cline © October 2, 2011