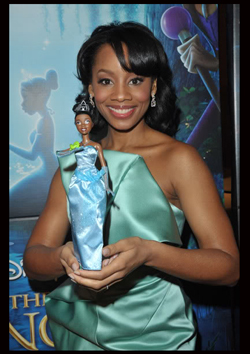 I was scheduled for a TV interview with Anika and was thrilled to interview her at the Four Seasons Hotel in Chicago. She’s petite and very beautiful. Dressed in a purple sweater jumper she looks amazingly like Tiana the princess on the Disney poster. Anika was down to earth and so sweet… her laugh is contagious. She appears to be on cloud nine and still enjoying all the success of her film. A pure joy to interview!

Sarah Adamson:  I want to thank you for speaking with me today and congratulate you on the success of the film! First of all you have such a beautiful name, is there a special meaning to it?

Anika Noni Rose:  Why thank you! (smiling) My mother wanted to give me a name that really means something and Anika means goodness and Noni means gift of God.

SA: Oh my, that is even more beautiful! How did you prepare for the voiceover for this film, as opposed to acting in a film?

Anika Noni Rose:  I prepared in the very same way, actually. I called around New Orleans and spoke to a couple of different people just to hear different dialects and see what I wanted that to be. I read up on the city. I had been to the city before, but I just read up on the history of it.  I listened to a lot of the music from the burgeoning jazz era.  That was kind of it…I sort of jumped in with both feet.

SA: I saw the movie in November with my niece who is 21 and she absolutely adored the movie as well. What do you attribute the success to this movie? Do you have any feelings as to why you think it was so successful?

ANR: I think there are several reasons as to why it was successful.  It was really nice to see the return to hand-drawn animation. I think there is something really romantic, beautiful and fantastical about what that is. I think people were ready for a princess who was not ready to be swept away – who had her own dreams and her own way of doing things. She was self-motivated and had a plan. The music was really good. People were ready for a classic fairy tale again. There are so many harsh realities that have been going on throughout the past few years. I think it was time for something soft and I think we eased in at the right time.

SA: It reminded me of the old Disney classics. The music as well – so wonderful.

ANR: Yes, I agree. Randy Newman did the music.  He’s so talented. He’s such a beautiful storyteller. I think that’s such a great gift to be able to insert the song that allows the story to move forward as opposed to just a song that’s (thrown in) you know, hey its been fifteen minutes, its time for a song.

SA:  What is your favorite memory of working on the film?

ANR:  That’s hard. But I would have to say, when they unveiled the trailer for me.  It was the first time that I heard my voice with the colorized and finished version of the character. I didn’t know she was going to look so much like me.  I had no idea. It was like the culmination of my dreams as a child. They did it as a surprise. I was at a toy fair and I was performing and they said, “Okay, Anika when you’re finished I want you to turn upstage and then I want you to walk upstage left, lets just practice that.” So when I finished singing my song I turned upstage and they pressed play. I boohooed! I could barely stand (laughs). It was extraordinarily moving to me.  Because I’ve always dreamed of being a Disney voice and I just had no idea that I would be immortalized in this way…that this would be here to tell this story, its amazing.

SA: I was going to ask you next how you felt when you saw the final product? What a great way to do that – to surprise you!

ANR:  They are really sweet guys! Ron, John and Peter!  The same The Little Mermaid team the same team that did Aladdin. They’re just lovely men. They love what they do and they have such a good time.  And they want to make sure that you have a good time too which, frankly, was not an issue for me at all. I had a ball!

SA:  I just have to ask since we’re here in Chicago, I know Oprah was in the film; did you work with her at all? Was she in the studio?

SA: Have you met her or talked with her?

ANR: I met her on Dreamgirls.

SA: I was actually going to talk about that next. How was it working with Beyoncé on Dreamgirls?

ANR: We all had a really good time. Beyoncé is lovely. She’s a beautiful person. She’s a sweet person.  I just watched a report on TV this morning where she has opened a salon for disadvantaged women to learn cosmetology and to forward their lives and that’s the kind of heart that she has. She’s really lovely. That’s it in a nutshell, that’s her.

SA: Eddie Murphy, was he funny on the set?

ANR: Eddie Murphy is a shy, quiet person and very private.  We got along very well. I had a really great time doing our scenes together.

SA: Well, I congratulate you on your success of The Princess and the Frog.  And… for our radio listeners, I wish they could see you, as you so beautiful in person.

ANR: Ahh…Thank you! (laughs and blushes)

SA: I saw you on the red carpet at the Oscars this past Sunday. What was that experience like?

ANR: I had a ball! I had a ball! It was just fun to be there. It wasn’t a hectic thing for me. I had my dress picked out for a couple of weeks. I knew what it was I wanted to wear. It was just fun. I saw people that I hadn’t seen for a long time. I met people that I hadn’t met before who were really kind and lovely which is really nice because sometimes you meet people and you’re like, “you’re not nice at all” (laughs)!

One of my friends was in The Hurt Locker, Anthony Mackie, I was so happy for him. He also happens to be from New Orleans so we had little love fest on The Princess and the Frog. I thought it was a lovely night. But, it could have been lovelier; we could have won (laughs).  But you know what, I really felt like the fact that the end of our journey was the Oscars is winning. I felt really good in that.

SA: That’s wonderful. Thank you so much for chatting with me today. Everybody go out and buy the DVD, The Princess and the Frog!