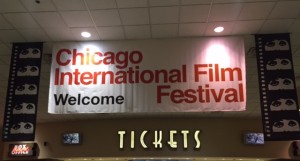 The energy was magnetic at the 2015 CIFF. The AMC River East was filled with press, actors, directors, producers, photographers, film lovers, volunteers, and last but not least, passion. Without passion, this event would not exist. Every person involved made sure the experience was enjoyable and documented by asking for feedback. When listening to so many Q&As, the passion of every filmmaker was felt, along with their genuine excitement and pride. Their journeys are a story in itself. A multitude of themes/genres were covered, and fifty-three countries were represented! It was difficult to select which films to screen because the choices were endless. These four films are just a snippet of what I viewed. I was drawn to them because they all were about possibilities and scenarios in today’s society. Each of these films is beautifully directed and touches on pertinent topics of sexuality, mental health, contemporary relationships, and the push/pull of work and aging parents. The filmmakers executed these stories with grace, care, and humor.

Nanni Moretti directs and receives screen credit in this story about a very demanding and overburdened film director (Margherita Buy), who is working tirelessly to complete her latest film while dealing with her mother’s terminal illness. She quickly learns that “the end of life” is something you cannot direct and struggles with the guilt of being sandwiched between finishing her work of art and spending time with her dying hospitalized mother (Giulia Lazzarinia). John Turturro plays an egotistical American actor who she hires for her film. He brings comedic relief not only to the set of her serious film, but also to her life by changing her emotional direction in this somber situation. The marriage of sadness and laughter is beautifully crafted by the chemistry between Turturro and Buy and Turturro’s stellar comedic timing and delivery. (The film is in Italian with English subtitles)

This is the gut-wrenching story of a divorced suburban mom, Gloria (Taryn Manning), who is trying to cope with her bipolar disorder and the reality of being alone when her only daughter, Beth, leaves to attend college. Beth (Madison Davenport) has been her main caregiver and has emotionally suffered herself. Her mother’s inconsistencies with medications lead to public outbursts that create drama and gossip amongst her classmates. Feeling ashamed and embarrassed, Beth withdraws from school activities. She has an opportunity for a fresh start when she goes to college. She is torn between staying close and honoring her dreams by attending a school that is far away. The relationship between Manning and Davenport is loving and authentic. Manning embodies the illness and helps you feel the depths of her inner turmoil. Her performance brilliantly sheds light and educates you about this disease that carries so many stigmas.

During the Q&A, director Valerie Weiss was asked how Taryn Manning and Madison Davenport delivered such a lived-in performance as mother and daughter. Weiss explained that before they cast Madison, she and Taryn were already doing research on the type of character she was playing. When they cast Madison, she was working in Austin, so they had to do their rehearsals via Skype with Valerie and Taryn in LA. Valerie said, “It was great because I could see both actors on separate screens and could see their reactions without turning my head.” She went on to say, “Taryn is such an amazing listener as an actor and giving to the other actor.” When they read through the script, Taryn was a very understanding mother, more so than Gloria was in the film. This helped build trust with her and Madison, and they were able to build a relationship from the ground up. Throughout the Q&A, there was a lot of discussion about how they approached the reality of bipolar disorder. In pre-production, they researched a lot of memoirs of people who had the disease and reached out to some of them so they could get an authentic portrayal. They were fortunate to have a lot of input from a mother and daughter team who went through struggles together and were willing to talk to Valerie and Taryn. They shed light on the physiology of the disorder and what is like in these different states since much of Taryn’s performance is so physical. It was also mentioned how careful they were throughout the production to never cross any lines or create any stigmas about the disorder.

This comedic, sexy, and unconventional love triangle is filled with surprises. Not only does Micha love Charlotte, but Micha’s girlfriend Melodie loves Charlotte too! Who does Charlotte love? Of course, she loves both of them to make for a complicated dance of romance with secret rendezvous. Once you think you have figured out which relationship will prevail, it turns on its head and keeps you guessing. This exquisitely cast French film is fun, flirty, and flawlessly written to tug at your heart, make you laugh out loud, and root for love. Demoustier, Moati, and Calamy create the perfect storm with their vulnerable, playful, and seductive charm. (French with subtitles)

The combination of friends, lovers, and candlelight refresh your palate with a nostalgic, yet comedic dinner conversation about the roots of their relationships and ideals of love. You are wined and dined through each of their crazy journeys with their current partners and ex-partners. The stories of the make-ups, the break-ups, the partner swapping, a lover with no memory, and a trip to Paris, only to result in a sexy, but not-so-sexy love affair keeps you mesmerized, intrigued, and entertained. Director Jack C. Newell injects improvisation along with his script, which allows for natural, effortless dialogue. The flow is so realistic and makes you feel like you can join in at anytime. You don’t have to be an improv fan to understand or appreciate this film. It is just the technique that allows you to be drawn in closer to the story. The cast is a combination of the best Chicago improv and theater actors.

During the Q&A, Newell explained that the film is half improv and half scripted. They shot over nine months and took breaks to re-write, then shoot, as needed, to allow the improvisation to be baked into the process. His goal was to combine the narrative structure along with the improv structure as a different way of story telling. He used the “Living Room” improvisational technique during the first half of the film, which centers around a restaurant table, while the second half of the film showcases the “La Ronde” technique. Cinematographer Stephanie Dufford commented that shooting with these techniques is a little tricky. For the dinner scene, they had three cameras running at all times to capture all aspects of the conversation.

Again, this is just a taste of what I saw along with Henry Gamble’s Birthday Party, The Middle Distance, For Grace, You Can’t Save Yourself Alone, and Bite. All of these films were superb, and I am already excited to see what the 2016 CIFF has to offer. It is wonderful to live through the eyes of so many talented people.