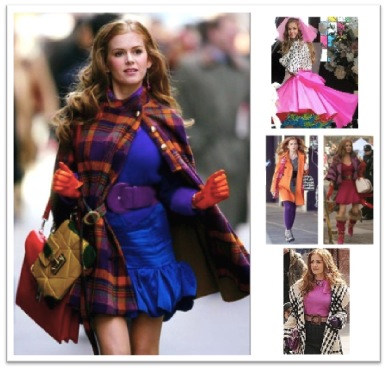 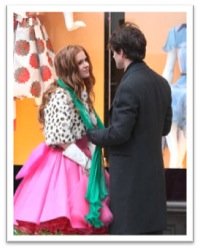 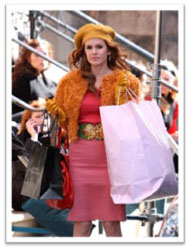 Everything Designer Can Ruin Everything!

A thoroughly enjoyable, fun, uplifting, fashion show of a film with an adorable talented actress at the center–Isla Fisher. The film is based on the popular book of the same title by the British author Sophie Kinsella. I’ve read the book and most in the series, Shopaholic Ties the Knot, Shopaholic and Sister, Shopaholic and Baby. Her official website is girly and has information about all of her books: www.randomhouse.com/bantamdell/kinsella/

Grab your girlfriend, sister, daughter, Mom or neighbor and go to the cinema to enjoy this film; as it’s part “Legally Blonde”, part “Sex and the City” and definitely “The Devil Wears Prada.” It’s a cinematic ‘fashion show frenzy’ throughout the film with a story that actually has a good message. Isla Fisher plays the lead character with a charming personality and she’s as cute as a button. You can’t help but sympathize with her as she begins her credit card shopping spree without any clue as to how she’s going to pay for all the items.

The film is told through first person narrative as in the book and starts as Isla (Rebecca) is about 5 years old as she observes women shopping and through the eyes of a child, she notices that they don’t even need money; they have ‘magic cards’. Fast forward to Rebecca age twenty something using her 12 magic cards in which to make her purchases.

Rebecca sash shays through department stores with glee as she truly believes they are meant for her total happiness. She’s absolutely rational as well (you can’t talk her out of buying things as she’s too busy trying to talk herself into them), and it’s this crazy combination that makes her an addict for our times. She wants and needs to acquire dresses, shoes, belts, handbags.  She simply must have them! Each of these things is a delightful object that will upgrade her identity, making her over into something as dazzling and flawless as the clothes themselves.

A defining moment happens when the store cashier comments, ‘declined, really declined, most definitely declined,’ as Rebecca is trying to buy a green scarf a ‘must have’ purchase for an impending interview. She makes a desperate run to an ATM machine to try and complete the transaction. Unbeknownst to Rebecca, she bumps into her future interviewer as he attempts to help her out by giving her money to purchase the scarf.

This comedy continues as Rebecca is hired to write for a ‘money savings’ magazine in the hopes of someday getting into the sister magazine which of course is fashion. Next we see our heroine at the local Barnes and Nobel purchasing a copy of Money For Dummies. Her roommate can’t believe that she has a job that’s centered around money as Rebecca is clearly out of control in that area. A comedic scene between Rebecca and her roommate involves opening her VISA bill. Tequila is needed as a sedative to ease the pain and shock of the numbers and it is hysterical.

Rebecca’s clothes co-star in the film as well. They are brightly colored and coordinated with fun accessories. The garments are an eclectic mixture of designer duds and vintage resale.

Ultimately Rebecca has to attend a shopping self help group to stop the madness. Her life begins spinning out of control as she loses touch with friends and relatives. Her mom is Chicago actress Joan Cusack and dad is played by John Goodman. The group sessions do begin to take hold and she confronts her addiction head on. A line from the movie near the end of the film sums up her feelings, “Instead of having a relationship with my credit cards I’d rather have them with people.”

“Shopaholic” addresses credit card debt and its ramifications as well as the other symptoms that addicts face, such as lying to yourself and others.