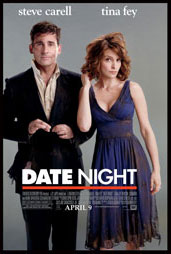 Carell and Fey are Entertaining in Date Night

How do you keep the fire going between two married people while juggling kids, a mortgage and job stresses? Date Night, a new comedy starring Steve Carell and Tina Fey, addresses these issues and more. The film is cleverly written with soldering chemistry between the two stars that often ignites in laughter.  Date Night centers on a normal, happily married suburban couple, who decide to mix it up a bit by trying a new restaurant and changing their weekly routine. What ensues next is non-stop action caused by an innocent case of mistaken identity.  So far, the best comedy of 2010!

The idea for this wacky romantic comedy is the brain child of director Shawn Levy. While dining with his own wife during one of their typical ‘date nights,’ Levy thought to himself, ‘what if we actually do something different on our date night instead of the same weekly plan’? And… what if we actually go so far as to go on an adventure that is totally out of the realm of our quiet suburban life?’ The idea was born; all Levy needed was a script writer and his two favorite main comedic actors and he was on his way.

The Fosters (Carell and Fey) live in a very nice suburban home with 2 small children. The film opens with both kids waking mom and dad by jumping into their bed and the time is 4:59 am. Both parents are tired and exhausted from the daily combat of their lives and desperately would love to get back the old feelings of romance and courting before kids.

When the couple decides to go to a ‘new’ hot restaurant in Manhattan, appropriately named Claw, they immediately encounter a typical rude host (you know, those one’s with an attitude toward anyone over 25). The scene is jam-packed with loud house music and scads of beautiful, but bored twenty-somethings. Of course they can’t get into the restaurant and decide to go home when an opportunity presents itself. The restaurant host calls the Tripplehorns numerous times and finally the Fosters take their table. This starts an immediate chain of events as two rough looking guys take them outside and try to find out where a certain computer chip is located.

The couple breaks loose and leads the creepy duo to Central Park. This turns out to be a bad idea as Central Park is dark and not very populated. Finally, when they escape again, they head to Times Square, a much better move. Upon a visit to the police station, they see the same creepy dudes dressed in police uniforms. Putting two and two together, the Fosters realize that the only way out of his mess is with help and to find the real Tripplehorns.

Help is on its way with an ex-real estate client of Claire Foster’s stepping in, played by a shirtless Mark Wahlberg, a security expert. These scenes are hysterical as Carell is totally bothered by the guy and begins to wonder if Wahlberg ever wore a shirt while his wife was driving him all over Manhattan.

Eventually, the Fosters meet the Tripplehorns, played chaotically by James Franco and Mila Kunis. These scenes are laugh-out-loud funny as the Fosters attempt to put the pieces together in spite of the Tripplehorns shenanigans as they are totally not on board with the program.

The film continues in a non-stop action style, but does have its poignant moments as the Foster’s don’t want to split up like their close friends have. Their chat becomes serious and Claire listens as her husband tells her his frustrations concerning their day to day life.

Date Night is a fun, romp in New York City that explores issues of everyday life while adding some romance and openness about marriage.

So book that babysitter now, kick up the wardrobe a notch, and be prepared to laugh out-loud for about 88 minutes. Be sure to stay for the ending credits as the outtakes are hilarious.