Egor Abramenko, the director of “Sputnik” and I talked about his inaugural Russian film, “Sputnik,” “Godzilla,” “E.T.,” and “Jurassic Park.” In 2017, Egor’s sci-fi thriller short film “The Passenger” inspired “Sputnik,” and it was selected for the Fantastic Film Festival.

At the height of the Cold War, in 1983, a Soviet spacecraft crash lands after a mission gone wrong, the commander, Konstantin played by Pyotr Fyodorov has amnesia. Russian psychologist Oksana Akinshina is summoned to evaluate the commander’s mental state. Egor Abramenko stated in the press notes, “We found several locations that were well preserved, but each of them had one thing and was missing the other… We searched for months until we found the Institute of Bioorganic Chemistry of M.M. Shemyakin of the Russian Academy of Sciences located in Moscow. This unique place determined the aesthetics of style of our film.”

The costuming of the cosmonauts included using real spacesuits in the opening scene inside the capsule. The military uniforms were handled differently as artists had to invent a special division that could handle contacts extraterrestrial organizations at the KGB.

Sarah Knight Adamson: What do you like about alien horror movies?

Egor Abramenko: Well, that’s a great question. I mean, I really love that the genre allows you to play a lot with different ideas, themes, meanings. Such genre as the horror movie, or science fiction, it expands the boundaries of the story. I would say, with the maximum impact. I love it.

Sarah Knight Adamson: What do you like about being a director? 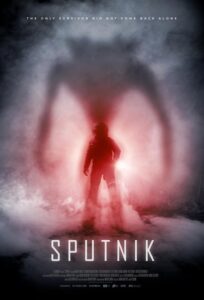 Sarah Knight Adamson: But I did like it. I know that’s the intention, but some horror movies, they say they’re horror, and they’re not that scary. Yours was really frightening. Do you think by setting it in 1983 that added a little to the frightening part of it, because of technology?

Egor Abramenko: In some ways, yes. There were a number of reasons why we picked out this specific time period. The first was, the 80s was a great period in terms of visual aesthetics. It had this rich texture, a lot of great stuff in terms of materials, costumes, and other things that we would want to play with. Also, that was kind of an interesting period in terms of Russian history. It was a transition period from the Soviet period to the new society. People’s mindsets were changing, society was changing, and we thought it would be a great time to unfold our story; the weird, peculiar story where everything could happen.

Egor Abramenko: “Godzilla,” obviously the Japanese movie, was the first experience I had in movies on a big screen. My dad took me to movies, and I watched that, and I thought, “Wow, giant monsters. I love that.” I’m a huge fan of different creatures, monsters, and, most importantly, such things allow you to play with ideas, with meanings. “Sputnik,” it’s the same; it’s not about the monsters, it’s about the humans and the monster that lives inside the humans in a wishful way, and kind of a metaphorical way.

Egor Abramenko: I do love it. Steven Spielberg movies affected me a lot, and we’ve already discussed my first big-screen experience, which was “Godzilla,” and the very first movie that I could recall that I watched on a home screen actually was “Jurassic Park.” It was in 1996. My dad just got back from a business trip, and he brought home our very first VHS tape; it was “Jurassic Park.” And since that, I fell in love with Steven Spielberg movies.

Sarah Knight Adamson:
Thank you so much for chatting with me, and best of luck with “Sputnik.”