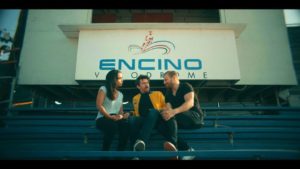 Luke Barnett and Tanner Thomason of “Funny or Die” fame have great on-screen chemistry, perhaps it’s because they have a history of collaboration or maybe it’s because they actually are friends. Needless to say, the duo reminded me of Paul Rudd and Jason Segal in the hit comedy, “I Love You Man”— a bromance movie written and directed by John Hamburg of “Meet the Parents” fame. The ‘let’s make a Christian movie’ plot takes a backseat to the heart of “Faith Ba$ed” as we are drawn in from the get-go, as we meet Luke and Tanner as youngsters in a laugh-out-loud scene featuring a nutty character named “Butch Savage.”

Director Vincent Masciale does an outstanding job of merely letting these two be themselves. Their natural chemistry is a plus, in addition to the depth of Luke Barnett’s script. We’re rooting for both of them to succeed; we’ve seen their obstacles, and yet, watch as determination leads the way. Luke works cleaning pools and has a side hustle selling diet tea in a pyramid scam. The talented Jason Alexander plays Niki Steele, an unorthodox sales guru, whose profound sayings are meaningless. Tanner works as a bartender at No Bar, saying he likes the free drinks and, in a comical scene, states, “My liver does have an expiration date.”

It’s clear that both have dreams of making more money and working at another job. Luke has a get-rich-quick scheme of creating a faith-based movie. His dad, played by Lance Reddick, the pastor of an evangelical church, gives him examples of Christian based movies that have made millions of dollars, case in point, Kirk Cameron’s “Fireproof.” Even though they decide to pursue the goal of making a movie, their friendship remains front and center. 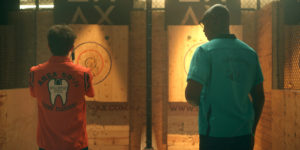 After quickly deciding upon the theme of their film, “A Prayer in Outer Space,” about a stranded woman astronaut on a Mars mission reciting the first-ever extraterrestrial prayer, they next try to figure out how to create the VFX for a scary space monster. As you can imagine, the audition process for their movie is one comical vignette after another. After the casting, Luke asks his crew,” Let’s talk cameras, who here understands how they work?” When production does begin, the green-screen jumpsuit costuming looks hysterical due to cast members continually wearing all green.

Again, the movie-making scenes are minimal while the friendship theme is ongoing, not to give away the film, what I can say is the script finds Luke and Tanner spending a fair amount of time apart, and there’s also a dad issue that’s explored. I also enjoyed the comedic genius of the two leads, their natural ability to entertain and carry a film from beginning to the credits rolling. I look forward to their next project and would like to see a sequel of “Faith Ba$ed, perhaps the two filmmakers veering into a different genre, a satirical musical comes to mind.