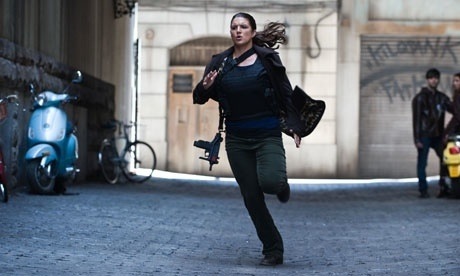 Move over Angelina, there’s a new girl in town. With a stellar cast consisting of Channing Tatum, Ewan McGregor, Michael Fassbender, Antonio Banderas, Bill Paxton and Michael Douglas, audiences may be convinced to run to the theater without even seeing the trailer. What audiences don’t know is that a woman with much less experience in the acting world impressively leads the cast. Mixed martial arts superstar, Gina Carano (American Gladiators) makes her film debut as female co-op specialist, Mallory Kane, and boy does Carano bring it! As soon as Mallory discovers she’s been double crossed, revenge is her answer to everything. Carano performs her own high adrenaline stunts in this action-thriller loaded with betrayal, espionage, action, suspense and secrecy.

Academy Award winning director Steven Soderbergh (Contagion) cranked out his 25th film, “Haywire,” and wasn’t afraid to go full throttle in the fighting department. Soderbergh set the bar high with his 2001 Oscar winning drug film, “Traffic” and the popular “Ocean’s” series. “Haywire” doesn’t quite stack up to those memorable films, however. Even though audiences are supposed to be almost as much in the dark as the victim, the storyline relies too heavily on the fighting itself and could have used a little more character development. With a title like “Haywire” expectations are high. Despite these criticisms, however, it’s still incredibly entertaining with its jaw dropping fight scenes, brilliant cast and gorgeous scenery throughout European cities and countrysides.

As the film opens, an extremely fit Carano, looking like a cross between Angelina Jolie and Mariska Hargitay, is sitting in a small town café in frigid upstate New York surveying her surroundings both in and out of the café. Her name is Mallory Kane. As soon as she sees a car pull up and a man emerge from the driver’s door (Tatum), Mallory becomes uneasy. He sits down to a cup of coffee and before we even have a chance to determine who he is and their association, he throws his smoldering cup of coffee in her face. She immediately whips out her gun but misses and instead pummels him to the ground as a group of horrified diners look on. Not even 5 minutes into the movie, it’s quite obvious, Mallory doesn’t mess around.

After Mallory almost kills the man, we find out he is a former co-worker name Aaron. She then forces an innocent young man named Scott (Michael Angarano) to throw over the keys to his new Mitsubishi sports car and jump in the passenger seat. As Mallory and Scott speed away in the snowy hills, Mallory begins to reveal her story, flashing back to nearly a week prior, in Barcelona. Throughout the film, we alternate back and forth between flashbacks and Mallory’s explanations to Scott while driving. Her retelling helps us gather the pieces of the puzzle…as much as we can, at least.

After realizing she’s been double-crossed by her own agency, Mallory hitch kicks it into high gear. Her assassins know her every move, now she must somehow eliminate any trace of her steps while hunting down the truth and (literally) fighting for her life.
Carano’s acting is admirable, while her fighting is inspirational, which equates to an authentic performance. Tatum is a laid back but respected co-op who takes a back seat in this film. Douglas and Banderas carry out their roles as head honchos with separate agendas, leaving us to wonder, “Who is the good guy? Who is the bad guy?” McGregor also plays his sleazy, sly and scheming character as Mallory’s boss and ex-boyfriend, Kenneth, quite well.

In most action packed films, the music intensifies and the volume is amplified during the fight scenes. For an action-thriller, this film is very unique in the sense that it contains minimal music and little to no sound effects. The lack of amped up audio makes each scene more realistic and in turn, more suspenseful. This is especially true in high speed chasing scenes because the intensity of the music doesn’t help us anticipate that the killer may be right behind the door.

Bottom Line: I wouldn’t categorize “Haywire” with other Soderbergh masterpieces, like his most recent “Contagion.” However, if you enjoy witnessing an unstoppable woman jab, cross, punch and kick butt against men twice her size you will thoroughly enjoy this thriller.