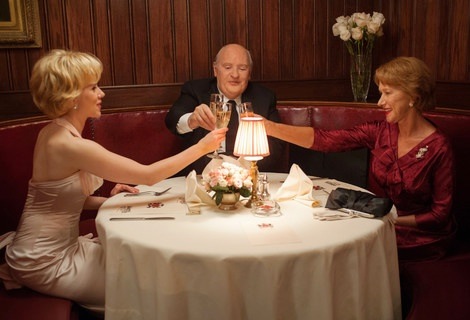 For nearly five decades, audiences have been the voyeurs of the voyeurs in Alfred Hitchcock’s films. Whether it is Blanche Tyler spying on Mrs. Rainbird in “Family Plot” or Norman Bates peering through a peephole to watch Marion Crane undress in “Psycho,” we cannot peel our eyes away. Now, audiences can finally be the voyeurs of the legendary filmmaker himself in “Hitchcock.”

In Sacha Gervasi’s (“Anvil: The Story of Anvil” 2008) biopic, Academy Award winners Anthony Hopkins (“Thor” 2011) and Helen Mirren (“Arthur” 2011) star as the famed director and his wife Alma. The film follows their love story and often times rocky relationship while filming “Psycho,” one of the greatest horror-thrillers of all time. Although, Hopkins gives an exceptional performance, his layers of prosthetic makeup and quick speech don’t make his Hitch (his nickname in the industry) as convincing. Mirren is his rock and also the glue to this film. Audiences will empathize with her significant and often unappreciated role as both Hitch’s life partner and business partner. Even though Alma has an enormous influence on Hitch and his films, she is often lost in the shadows behind the limelight and Hitch’s famous leading ladies. The film doesn’t show the creation of “Psycho” but that doesn’t necessarily take away from the film. Despite his often rumored temper and dark side, this drama takes a light-hearted approach with humor woven throughout the behind the scenes hardships of a successful Hollywood mogul.

It is surprising that it took this long for a biopic of Hitch to hit the big screen but perhaps it is fitting considering that he is regarded as the ‘master of suspense.’

Based on the book by Stephen Rebello, “Alfred Hitchcock and the Making of ‘Psycho,’” the film picks up in 1959 just after Hitch’s successful hit “North by Northwest.” He refuses to repeat himself with another spy thriller and longs for the creative freedom that he once had at the start of his career. One day, Hitch is introduced to a story loosely based on real-life serial killer Ed Gein (Michael Wincott, “A Lonely Place for Dying” 2007) and becomes obsessed – so infatuated that he actually imagines having conversations with him. Despite intense backlash and let’s just say a “Shadow of Doubt” from Paramount Pictures, the community, friends and even Alma at one point, Hitch decides to finance the film himself for $800,000 and hit the ground running.

While Hitch is consumed with “Psycho” and leading ladies Janet Leigh (Scarlett Johansson, “The Avengers” 2012) and Vera Miles (Jessica Biel, “Total Recall” 2012), Alma agrees to help screenwriter Whitfield Cook (Danny Huston, “Stolen” 2012) on a script. She finds freedom in her companionship with Whitfield as they whisk away to his secret beach house and write together. Alma’s flirtatious side is certainly exposed with Whitfield although she doesn’t cross any boundaries, as she is loyal to Hitch. From an outsider’s point of view, their interactions and time spent together look suspicious. Eventually, their friendship sends Hitch into a rage of jealousy. We see Hitch’s drinking spiral out of control – not to mention his temper on set. The height of his rage just so happens to be the same day that Janet Leigh shoots the infamous shower scene. Let’s just say, Hitch gets the blood-curdling scream he wanted out of her.

Hopkins and Mirren carry the film but the supporting cast is also worth noting. Johansson is sophisticated and poised radiating the classic movie star allure as Janet Leigh. Biel plays Vera Miles well but it is still difficult to see her portray such a timeless character after seeing her in so many rom-com and action films. Other cast members include Toni Collette, Michael Stuhlbarg and Kurtwood Smith.

It was interesting to see trends from decades ago resurface in today’s fashion like the one piece, strapless swimsuit that Alma wears. In one scene while filming on the set, Hitch walks behind a lit screen so that only his classic silhouette is seen from the other side – keeping with his tradition of making a brief cameo in all of his films. A comical moment is when Hitch is in a censor meeting and a committee member asks if there will be nudity during the shower scene. Hitch simply replies, “She won’t be nude. She’ll be wearing a shower cap.”

Bottom Line: If Hitchcock were alive today he would probably say that his own biopic isn’t quite up to par. Performances by Mirren and Hopkins will certainly drive audiences to the theater and won’t leave them disappointed.