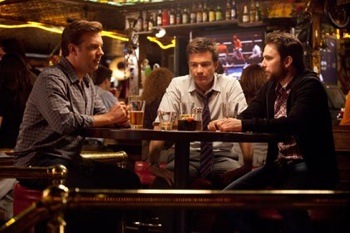 Jason Sedeikis, Jason Bateman and Charlie Day in “Horrible Bosses”
America’s Sweetheart Shows Us Her Dark Side When quitting your job is not an option, something’s got to give. For Nick (Jason Bateman, “The Switch” 2010), Dale (Charlie Day, “It’s Always Sunny in Philadelphia” 2005-2010) and Kurt (Jason Sudeikis “Hall Pass” 2011 and “Saturday Night Live” 2003-2011), they don’t just challenge their imaginations; they put those thoughts into action. While sipping on a few brewskies after a long day at the office, the three stooges concoct a “hypothetical” plan to kill their bosses, but the “hypothetical” part of the plan was quickly dropped. Next thing we know, these geniuses dish out five grand to have an experienced ex-con (Academy Award winner, Jamie Foxx, “Due Date” 2010) do the their dirty work. Once they hand over the money, they find out he’s only their murder “consultant.” These fools now need to come up with their own foolproof plan. This is where the chaos ensues for the desperate employees and the fun begins for the audience. Kevin Spacey hits the nail on the head playing Harken, Nick’s condescending, narcissistic boss. Bateman is the laid back, practical and sarcastic guy we’ve seen him play many-a-times (“Couples Retreat” 2009, “Juno” 2007,” and “Arrested Development” 2003-2006) but we’re not sick of him just yet. Like the saying goes, if it’s not broke, why fix it? Kurt, played by the ever amusing, Sudeikis, is actually the only one of the three musketeers who loves his boss – until he dies of a sudden heart attack that is. Now, Kurt is at the mercy of his old boss’ crack-head/pimp of a son, Bobby (Colin Farrell, “Crazy Heart” 2009). Dale finds himself in what some may call a unique situation. His incredibly attractive boss won’t stop trying to seduce him yet he is set to soon marry the love of his life and couldn’t be happier with her. His high-pitched voice and uneasy nature throughout the entire movie add hilarity to every scene. Jennifer Aniston, who is probably the one to thank in regards to creating the buzz about the film, turns on her dark side (literally) as Dr. Julia Harris, D.D.S. Sporting an atypical Aniston look, she busts out the bangs and long brunette wig, transforming into a sex crazed dentist who can’t keep her hands off of Dale, her assistant, or anyone else for that matter. While Aniston does leave little to the imagination – walking around in nothing but a lab coat or her after work lingerie – I hate to break it to some of you, but the rumored Jennifer Aniston topless scene is false. Thought I should be upfront here. Props go to the Warner Bros. marketing department on that one, though. The likable cast will be the main draw to this film. The plot is foolish but it is simple and it works. Perhaps this is why I initially didn’t expect much from this comedy and ended up being pleasantly surprised. Audience laughter was constant throughout and as I departed the screening, those around me boasted about the film. Some may compare director Seth Gordon’s flick to, “The Hangover” (2009) with it’s unstoppable male trio, sharp script and as much vulgarity that is legally possible. “Horrible Bosses” is certainly a ‘sit-back-don’t-have-to-think-too-much’ experience. If this film teaches you anything it would probably be how to properly blackmail someone. There were a number of potentially hilarious scenes but not all of them delivered. The unexpected one-liners redeemed these occasional lulls, however. In several scenes, specific phrases would cross the screen in a humongous, all caps font, emphasizing a character’s strong feelings. This added even more absurdity and dimension to the film. While some of the actors are criticized for dumbing themselves down for these rolls, (that may very well be true) one thing is for sure – you can tell they had a hell of a good time doing so. Bottom Line?
This incredibly raunchy comedy is worthy of a trip to the movies even on a sunny summer day. Don’t jump out of your seat as soon as the credits start rolling. The series of outtakes at the end will make you fall out of your seat if you haven’t already. Jessica Aymond © July 8, 2011