The film Dinosaur 13 centers on the discovery of the largest, best preserved, and most complete Tyrannosaurus Rex ever discovered. Susan Hendrickson of the Black Hills Institute found “Sue” in 1990. Fittingly, the T-Rex was named after her. Unfortunately for the Black Hills Institute, Sue was found on land that was held in a trust by the United States government, which resulted in lawsuits and the seizure of Sue. Eventually, she was auctioned off for the price of 7.6 million dollars and unveiled at Chicago’s Field Museum in 2000. In conjunction with the press tour for the film, I was invited to speak with Bill Simpson, a paleontologist with the Field Museum. If you ever wanted to know more about the largest T-Rex ever discovered, this is a great place to start! 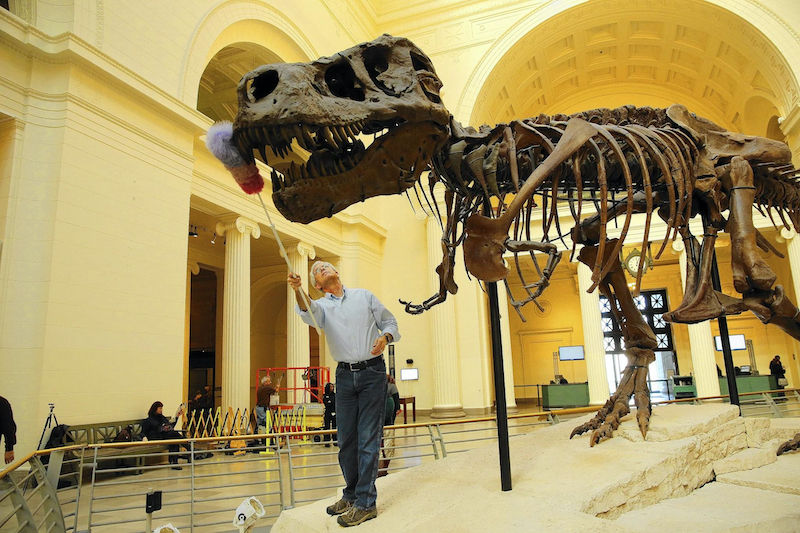 Sarah Knight Adamson: What has Sue brought to the Field Museum in terms of education?

Bill Simpson:  You know, Sue (the T-Rex Dinosaur) is really a spectacular specimen in all three of our missions. Because she is the most complete T-Rex, she’s an important research specimen. She is an iconic exhibit for not just the Field Museum, but I think for Chicago overall, so people come to Chicago just to see Sue. And, of course, once we get them in the front doors, we can educate them not only about Tyrannosaurus Rex, but about all the wonderful things that we have on exhibit here.

SKA:  Now, I have a pressing question. Is Sue a girl or a boy?

BS:   We don’t know the gender. We refer to her as a “her” because her name is feminine. But we really don’t know. Could be a boy named Sue. (Laughing)

SKA:  I love it. Is the Field Museum sharing information about Sue?

BS:  Absolutely. The side of the museum that we’ve always had trouble getting people to know about is behind the scenes, the research side of the museum. We’re a world-class research institution, and what we do is to publish research on our specimens. That publication is a formal way of communication about, in this case, Sue with the rest of the world. We not only study Sue, but we invite and encourage researchers and paleontologists from all over the world to come and study Sue, and they have done so. Sue has been involved now in over fifty published research publications.

SKA:  That is wonderful!

BS:  People not only know about the research side of Sue through these publications, but, of course, all the people that come to Chicago and see Sue. We also have produced two mounted exact casts, exact copies of Sue, and those have traveled the country and the world.

BS:  Millions and millions of people have gotten to see what Sue’s like.       We’re all about getting out the information about Sue – scientifically, publicly, exhibit-wise – in any way we can. That’s what the Field Museum does.

SKA:  What have you observed from people that maybe see her for the first time? What’s their reaction?

BS:  We spent some time deciding on what sort of pose we should put Sue in. We settled on this pose where she is bending down, as though she were feeding on an animal she just killed, and something has disturbed her. She’s just looked up and she’s looking right at a human eye level. So I think that’s very effective. You can look Sue eye to eye, and imagine in your mind’s eye what it might be like to have gotten her attention.

SKA:  How do you gather information from Sue? What kind of things? Have you x-rayed her? If you could give us some examples of what you do here as a scientist to study her.

BS:  The basic bread-and-butter that we’re talking about here with the study of Sue is the study of evolution. We want to know to whom is Sue related and what’s the pattern of evolution amongst those different species. Because Sue is an extinct animal, Tyrannosaurus Rex is gone, mostly what we, almost entirely what we have to base our evolutionary comparisons on is the shape of the bones. That’s the main thing we’re interested in. The shape of the bones. So we’ll compare the shape in a T-Rex, the bones of a T-Rex, with the shape of the same bone in, say, Gorgosaurus, which is a relative. Or Daspletosaurus, or a bunch of different closely-related animals in the same family.

Another way to get “shape data” that’s not so easily gotten through just direct observation is using x-rays. What we have used a lot on Sue is what we call CT scanning, which is basically a series of x-rays. The computer is able to put together this series of x-rays into a 3-dimensional model. For example, that’s how we got to look at the inside of the cranial cavity where the brain would sit, and get some idea of what the brain of a T-Rex would look like.

SKA: That brings a question to my mind. So the T-Rex bones, do they change in shape and size through evolution, or are they the same?

Some species, through study, it may be discovered, that, in fact, there are two names for the same species. This happened with Brontosaurus, which is not a Tyrannosaur, but it’s a dinosaur.

SKA:  As a teacher, I know these names, dinosaur names, change all the time.

BS:  That’s all part of it. We may find that two names refer to the same species. In which case, one of the two names will be dropped out as a junior synonym. That’s what happened to Brontosaurus.

We’re comparing T-Rex to all the other members of the Tyrannosauridae, as well as less more-distantly related animals. But it’s all a comparison of the bones. One of the interesting things is not only are the bones a little bit different in different related species, but the shape of the bones change through life. Sue is the most complete T-Rex, which is the most important thing to us.

SKA:  Is she older or younger?

BS:   At this point in time, she is the oldest T-Rex we know of. She died at the age of about twenty-eight years.

BS:  Which helps explain why she’s the biggest.

SKA:  That was really my next question. What are some really unique facts about Sue? You’ve probably answered that.

BS:  Some of the things we use Sue for is to discover how fast she grew, how big she got, and how old she got. Because Sue is at the endpoint of all of those, she really helps define the species in that way.

SKA: That’s just so exciting. Have you become attached to Sue?

BS:  Oh, Sue is very important. It was a once-in-a-career opportunity for all of us. Not only do I recognize the impact that Sue’s having on our scientific community and on our public, it was just a real honor and continues to be an honor to be associated with this project. This is an iconic Field Museum specimen. I love working with it.

SKA:  I love that. What do you hope she brings to the science world of research?

BS:  She continues. She is studied continually. Every year, scientists from all over the world come and look at her, as well as our own scientists in-house studying her. As I’ve told you, there have already been fifty publications which include data gotten from this study of Sue. She’s an ongoing research specimen.

SKA:  So, I was just wondering, as the scientist, if you become very fond of your specimens.

BS:  I think maybe fond in a different way. We don’t generally talk to our specimens. But they’re very important. All of our specimens are part of an important research collection. That research collection is like a library. That library has a librarian. That’s me. I’m the librarian for the Fossil Vertebrates Collection. Our research collection is like a library. We have a big, ongoing loan program, so at any one time, we have hundreds of fossil specimens out on loan to paleontologists all over the world. I’m the gatekeeper. If they want to come here and study the specimens in our research libraries themselves, then they have to go through me to get in. I’m very much like a librarian, but instead of books, it’s fossil vertebrates that I have.

SKA:  Are there other dinosaurs that you’d like to see here at the Field Museum?

BS: I tell you what. When we go out in the field, we’re looking to answer some research question that hasn’t been answered yet. For example, we’re working in the early Cretaceous of Utah. This is a period of time between the classic late Jurassic faunas that include things like Apatosaurus, what we used to call Brontosaurus, Diplodocus, Allosaurus, and Stegosaurus. It’s a period of time between that late Jurassic classic fauna and then the classic late Cretaceous fauna that includes things like Tyrannosaurs and Triceratops, the horned dinosaurs, and the duck-billed dinosaurs. Those two faunas don’t have much to do with one another. In the in-between, in this period of the early Cretaceous, there’s a transition from the old Jurassic to the new Cretaceous. That’s one of the interesting areas that we’re researching right now.

We have an ongoing field program in the Cedar Mountain Formation of Utah, in the San Rafael Swell. We’ve been there five or six years. We’re going back tomorrow.

BS:  We go out and we collect our own specimens. We’re looking for new dinosaurs all the time.

SKA:  When you go to collect these, how do you do that, and are you able to take them back? Do you have to pay for them?

BS:   They almost always, not always, but most of the time, they come off of public land. We have to apply to the governmental body, whether it’s federal land or state land. We make an application and we are either granted or not granted a permit. If we’re granted a permit, then we become the repository, the official library that holds these fossils. We collect them. We bring them back. We take the rock off of them. We study them. We publish on them. Then they go into our collection range, and I’m the person then in charge of taking care of them and making sure they’re data is kept associated with them, that we researchers that want to study them get in to study them.

SKA:  You have a very exciting job here, really.

BS:  There’s a lot more here than what you see if you just walk through the exhibits.

SKA: What do you hope people take away by simply just seeing Sue when they come?

BS:  I think there’s a certain thrill that people get from seeing the real thing. Dinosaurs – except for birds, which are dinosaurs – but the non-flying dinosaurs are all extinct. I think they stir the imagination more than most fossils. When people come to the Field Museum, they know they’re going to get to see the real thing. Not a plastic copy, but the real thing. I think when they get within fifteen feet of a real Tyrannosaurus Rex, there’s just a thrill there that you can’t get many places on Earth.

SKA: Thank you so much for chatting with me today.

BS:   You bet. Thanks for coming. We appreciate the coverage.

SKA:  Best of luck with Sue.