As producer, Marc Turtletaub has been investing cash and cred in femme-centric feature films since 2004, standing behind award-winning films such as Little Miss Sunshine with Toni Collette and Abigail Breslin, and Loving with Ruth Negga among others. Sitting in the director’s chair for this year’s Puzzle, he’s brought to life a most memorable female character named Agnes, a doting albeit repressed housewife and mother who finds her sense of adventure, self-esteem and new meaning in life when she casually enters the realm of competitive jigsaw puzzling. As with Turtletaub’s other cinematic credits, a great measure of Puzzle’s success rests with the film’s leading lady, Kelly Macdonald, whose complex and nuanced performance as Agnes is funny and heartbreaking and entirely relatable. Here’s what he had to say in a chat with AWFJ’s Sarah Knight Adamson after the Chicago Film Critic’s Festival’s May 14 screening of the film at the Music Box Theater. 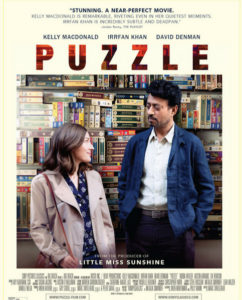 SARAH KNIGHT ADAMSON: The audience at tonight’s screening reacted very warmly to Puzzle. That must be very gratifying. What do you like best about attending screenings of your films?

MARC TURTLETAUB: You never know how an audience is going to respond. One of the wonderful things about showing a film in front of a live audience, is, just as we had tonight, you feel the dynamic of an audience laughing. You could just feel the response as people are in a room together. You just don’t get that in your living room. We had that same experience at our premier at Sundance, it was as great a night as tonight.

ADAMSON: You’re often associated with films that have strong female leads, as does Puzzle. Let’s talk about your star, Kelly Macdonald. She is one of my favorite actresses. She’s so multidimensional in her ability to do comedy and drama, which she blends so beautifully as Agnes. Can you speak a bit about working with her?

TURTLETAUB: Yes, she’s brilliant. She gets herself completely lost in a role. She’s wonderful in everything she does.

ADAMSON: Yes, exactly. She’s so unobtrusive about her acting career. When asked about her role in Puzzle she’s quoted as saying; “Just to get the script where I’m actually the star is quite something.” It’s refreshing that she has such modesty about her tremendous talent.