Nathan Fletcher grew up in a surfing legacy family on the beaches of southern California; he had a dream of jumping from a helicopter with his surfboard onto a relatively large wave and riding that wave to its duration. Known as the Acid Drop, in the documentary film, “Heavy Water” his dream is realized as Michael Oblowitz an action film director set up the filming and the result is spectacular to experience as there is no green screen, no cable harnesses, no cutting and slicing of film, the never before performed stunt is completed in one take. Opening for one night only June 13th in theaters, check out Fathom Events to buy tickets: http://bit.ly/FathomEventsHeavyWater

I interviewed Nathan Fletcher and director Michael Oblowitz via Skype on June 6, 2019. Myself having grown up in southern California, I have a fascination with surfing and enjoy watching the sport. Director Michael Oblowitz has an impressive action and documentary film background, of which contains the surfing documentary, “Sea of Darkness,” (2008) which I also requested to view in researching for the interview. What I can tell you, is that Nathan Fletcher is connected with the right director as the film is not only a tribute to the Fletcher family surfing legacy, the final live narrative action (the Acid Drop) is both mind-boggling and inspiring.

The interviews are divided into two sections; Nathan Fletcher starts out, followed by Michael Oblowitz.

Nathan Fletcher chats about his strong female role models, his love of surfing, what completing the Acid Drop means to him, and we have fun talking about the word “gnarly.”

Sarah Knight Adamson: Do you feel that you have an innate ability, as many athletes do have natural skills, especially in your surfing and skateboarding?

Nathan Fletcher: I don’t feel that I have a natural ability because I’ve been practicing my whole life. I’m really passionate about surfing, and I love it. I’m going by intuition, and following my heart, and also what I’ve practiced and what I’ve trained, and all those things. Put them all the together, and now I’m here with you doing interviews. I’m not even surfing, but this is part of my job at this moment. (Nathan smiles)

SKA: I’d like to ask you about any strong female roles that you have had growing up.

NF: My mother and my grandmother. My mom is still a very strong woman. She wakes up, works out religiously, and runs the family business, Astrodeck. My father invented surf traction, and they’ve had their business since 1975; the year I was born.

SKA: Now that you have your own kids, did you gain some knowledge from them about raising kids and teaching you about life?

NF: My parents, they were like ‘alternative parents’ in the time when that hadn’t happened yet. They took me out of school, and home-schooled me so I could travel and surf, and play guitar, and enjoy the world for what it was instead of being confined into a classroom.

NF: The main thing I’ve gotten from my parents really is to just enjoy and love what you do, and that’s going to the beach and surfing. They said, “If you love it enough and do it enough, you’ll be able to make enough money to live and enjoy your life.” Because my dad in his generation, he couldn’t. Mainly because if you wanted a surfboard, you had to make it, the same if you wanted surf trunks, you had to make them. You had to make everything yourself, even the surf bag to carry your surfboard on the plane, as no companies were making any surf equipment. Mainly, they taught me to enjoy my life, and go to the beach, and go big.

SKA: How fortunate for you to be raised that way. That’s every kid’s dream, really. I saw those videos of you at age 11, surfing 30 ft. waves in Hawaii.

NF: Yes, so for me, now that I have my own kids, that’s why I moved to Hawaii was so they could be around the beach and enjoy the ocean because California is not the same as it was when I was a kid or when you were a kid living there. I’m doing the best of my ability to give them what I was given and do the best I can.

SKA: I have a question about your ethnicity; I believe you said in one interview that you are part Native American?

SKA: Can you tell us about the first time you landed the Acid Drop jump, and how that felt? Can you go through the sequence just a little bit about where you have to get to land? I know there were a couple of different sequences.

NF: Well, when it came down to getting the opportunity, I just said I’m going to do it. When I get to the day in the helicopter that’s when I’m going to figure it out because you don’t know. The trouble is, I didn’t think through all that goes into something like this, like the insurance, the FAA (Federal Aviation Administration), the whole production team, and the cost. Then, on that day, when you have the permit, it can’t be another day. I have to go from point A to point B and right away, otherwise it just doesn’t happen.

SKA: Yes, and that day wasn’t the best weather wise.

NF: Yep, it’s raining, windy, with many of my respected peers in the profession watching, and so many safety people in the water. When I did it, and I completed it, it wasn’t until that moment at I knew this was going to be huge. That it’s going to break new boundaries.

SKA: Yes, indeed, you did complete it, and it is something you will always have.

SKA: On to some quick, fun questions. Do you ever use the term ‘gnarly’?

SKA: I love it. What does it mean to you?

NF: Even my kid says it. He’s like, “Dad; I’m so gnarly!” Then we kind of say gnar, gnar in a garbled way, but yeah, I love gnarly. It’s also about the sound of ‘gnarl,’ and there’s the “Capital G” gnarly, too.

SKA: Final question in the world of Big Wave surfing, what is your number one life or death rule?

MF: My number one rule is, my life or death rule is get out of the water if you’re not having fun. 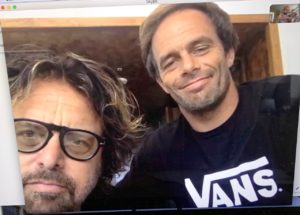 I mentioned to Michael that Nathan’s stunt reminded me of the thrilling Halo Jumps in the “Mission Impossible” movies in terms of the actual visual. Michael wanted to set the record straight, “Those aren’t real jumps. Those are all done in a studio, and then done in green screen, and then CGI. I’ve directed a bunch of action movies, so I know how to do all those visual effects. But you can’t do that when you’re working for Redbull because they have a protocol. You have to have one shot in your film that actually shows the entire stunt completed from beginning to end without any edits or special effects.

I had a camera on the helmet of Rush Randon, the guy in the helicopter who was helping Nathan, and that camera was always pointed down at Nathan as he jumped, so he was mindful of getting the full jump all the way from getting out the helicopter, all the way to hitting the wave, all the way to riding it when it happened. We had to have that shot to show that there are no visual effects. That it’s all real, and nothing is being cheated. That increases the risk level of the stunt by a multiple of about a million because everything you see in a Hollywood action movie is all special effects. It’s all CGI, and it’s done with harnesses. It’s such a different animal.”

He continued, “Even though I employed all of the narrative strategies of an action movie, dramatic music, fast editing, beautiful camera angles, slow motion, yeah. All that has been done because I’ve shot so many action commercials. I used to direct Huffy bike commercials and Nike. To shoot where you have to get it in one shot with an athlete risking his life, and the life of all the crew members with me sitting underneath a helicopter or a jet ski with a huge red underwater camera, and surrounding me are four other cameramen with different cameras. In addition to the 85, Go Pro cameras mounted all over the helicopter, and on people’s helmets.”

Michael’s storytelling is very evident in his films, and I appreciated the chance to view his other surfing movie “Sea of Darkness.” I asked him about the title of his films and their significance.
“All my titles are symbolic; I’m very conscious of making films at all times. I am a trained filmmaker in the Master’s program in film at Columbia University in New York, and my classmate was Kathryn Bigelow, who I’ve known since we were very young. We used to teach a course together called Deconstructing the Cinema when we were in our final year as Masters students. I made a short documentary on Apartheid in South Africa in about 1982, which won the short documentary category in the Melbourne Film Festival in Australia back then. I’ve been doing this for a hell of a long time.
There’s nothing serendipitous in my movies. Even though they’re “surfing” documentaries, “Sea of Darkness” is called “Sea of Darkness” because it’s based on “Heart of Darkness” the novel by Joseph Conrad.

“Heart of Darkness” was adapted as a screenplay in the movie “Apocalypse Now,” and it was adapted by John Milius, the writer who was in “Sea of Darkness.” He’s the main voice in “Sea of Darkness.” Because that is a metaphor for me, the kind of weight of nature, the weight of darkness, and the weight of the ocean. I carried that metaphor through into the second movie, which is “Heavy Water.” It’s a symbolic usage of language and imagery to convey the existential state of people that I’m working with.”