Thomas Haden Church, as an actor, has a unique persona—ruggedly handsome, square-jawed—a mystique cowboy, and let’s not forget that undeniable Texas drawl. He’s exactly as I imagined him to be in person; let’s just say if the ‘Marlboro Man’ from the sixties could actually speak, that pretty much sums up the ultra-cool Thomas Haden Church.

And speak he did—his voice remains true to his relaxed macho image; it has a deep, resonating baritone quality; it’s no surprise that he has voice credits in major films, although his voice work is not what he’s known for. Church’s breakout role was in a the Academy Award-winning film, Sideways (2004), from which Church himself scored a nomination for an Oscar for his Best Supporting Role.

We met on Wednesday, June 24, 2015, at the Waldorf Astoria, in a lavish suite in Chicago. Upon meeting Church, he instantly smiled and gave me an expected firm handshake with a definitive nod.

As I was setting up my digital recorder, he began telling me a story about a Texas journalist (Evan Smith) who came to his ranch in Texas (2005) to interview him for a big cover story for Texas Monthly magazine. It seems that the said journalist had spent eight hours with Church that day and phoned him a month later to say that he only got five minutes of the interview due to his low batteries. And…could he please re-cap the whole day in a thirty-minute phone conversation?

I assured him my batteries were fresh and that I could always use my iPhone as a backup. We both laughed, and he continued, “And you know what? Evan and I are still friends to this day.”

The first order of business was to congratulate him on his performance in the film Max as Ray Wincott, a father whose son dies while in combat while in the military. Ray decides to adopt his son’s traumatized war dog (Max) and gives his younger teen son (Justin, played by Josh Wiggins) total responsibility for Max. I asked what drew him to this role in this family film.

“The unique perspective of presenting a war hero, a combat vet’s perspective of a dog, and how critical these animals are to protecting and saving solders’ lives in Afghanistan and Iraq,” he replied. “Also the dramatic aspect of Max (the war dog) and the fact that he’s vulnerable to all of the emotional trauma that a human is in post-war experience.”

And what is one of his most memorable scenes from the film?

“One of the most touching moments in the film is when Justin is sprinting back to the house during the Fourth of July fireworks display to check on Max. Sure enough, Max is almost suicidal with the noise; his PTSD (Post Traumatic Stress Disorder) kicks in big time. Justin immediately comforts Max and Max completely turns himself over to Justin. It’s such a pivotal point in the movie—that worked on so many levels.”

Church’s father was in the military and wounded. I was curious if he drew upon that for the role.

“He was a combat veteran who was injured in combat. He was actually in a jeep accident that caused the injury. My dad rarely talked about combat and passed away three years ago. He would talk about amusing vignettes of being a soldier, but not often. He was very stoic about it and what’s important to us is that he’s buried in the National Cemetery outside of Dallas with full military honors, which meant a lot to us and to my mom. She was a supervisor for Southwestern Bell, and she too will be buried there.”

Were there any similarities between Church and his dad, given the character he plays is a wounded war vet?

“My dad was a very ‘task to turn’ individual, and I embody that myself, but what is very cool is that Josh (Wiggins) is too. My dad and I were contrarian with one another for a lot of my teen years and college years. The fact that Josh and I have this defiant dynamic—I would say is reminiscent.”

Lauren Graham plays his wife (Pamela Wincott), and they have great chemistry in the film.

Can you tell us about a scene that you enjoyed filming with Lauren Graham?

“Lying in bed with her yelling at Josh to stop Max from howling, because I kept making her laugh. (We are both laughing now.)

“The director would come in and say, ‘You’ve got to stop being funny; every take, you’re being funny.’ What’s comical to me is that they actually did use a take, which I think is actually one of the more comical ones.”

Church continued by talking about another scene with Lauren Graham.

“The funeral scene was heart-wrenching, and I thought that Lauren was beautifully poised, but emotional.”

“The way that scene was put together with Max coming in and lying down under the casket and just waiting for Kyle to return, not completely comprehending everything but knowing that Kyle went down in battle. The emotional confusion of that scene I think largely defines the movie because, along with Max, the rest of us are also in a state of emotional confusion; where to put the sorrow, where to put the grief, where to put healing. Then the dog is there as a constant reminder of the death of our son; this is just a complex tapestry of emotion.”

Because Sideways is one of my favorite movies, I had a few burning questions, which were answered by a single question. I was curious as to director Alexander Payne’s directing style and Church’s favorite scene.

“I have to ask you about Sideways; what a great film. And, by the way, I loved your performance in the movie. Can you talk about a scene from that film (that you’re in) that you enjoyed?”

“Well, thank you! There are several and I have to tell you that every scene in that movie was so carefully rehearsed. It all started with the script, but what was tremendous about Alexander Payne and his sidekick, Jim Taylor, is that they were willing to defer to me because I tend to be a very spontaneous individual. I like to change things without causing others to stumble through a scene. But it was improvised at times and spontaneous, but it always came back to what was scripted, and I loved the schematic of that.”

“There were so many that made us laugh so hard, but I guess the one that worked for us, it killed us, was after Sandra Oh’s character attacks me and he’s (Paul Giamatti) taking me to the hospital and I have this towel over my face. I’m just screaming these accusations at Paul that he betrayed me and screaming through a bloody towel and, by the way, being the scoundrel that I am and yet trying so desperately to shed some of the shame onto Paul for such a random act that he commits. And did you know that it is the first time that he’s actually honest in the film? Through the whole movie, and he tells the truth. Then I immediately attack him for telling Virginia’s (Madsen) character the truth. Yes, me screaming through that towel was just killing us.”

Since our time was about up, the final question was his expansion on the film. “Anything else you’d like to say about the film Max?”

“There’s such a wide audience out there that will find it inspirational. It will inspire people to learn more about war dogs units, more about what happens to these animals when they come back. I did an event this past weekend at an Air Force base in Texas and had an opportunity to meet some wounded warriors that were in canine units. These dogs; they’re missing a limb or have suffered body trauma. They are still ready to go. They still have that same level of training and discipline. And you can tell just by looking at them, they’re looking at their handlers and ready to go back to work. Whether it be find a wounded soldier, find some weapons, find the enemy; they’re just trained at such a level they just want to go back to work.” 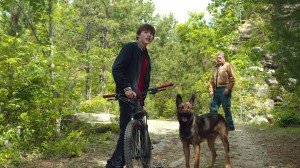 “Thank you so much for speaking with me today and best of luck with the film!”

“Thank you very much.”

Author’s note: In the film Max, the dog Max is a Belgian Malinois (pronounced Mal-in-wah), although I assumed it was a German Shepard. Through more research, I discovered that this breed of dog is also used to protect our President and the White House.