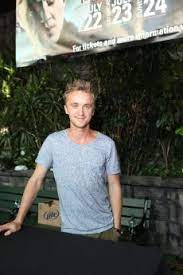 Crowds of people came out to meet British actor Tom Felton, 23, who has played the character Draco Malfoy in all eight of the Harry Potter films since their debut in 2001. He appeared at the Hollywood Blvd. in Woodridge on July 22 and 24th and Hollywood Palms on July 23. 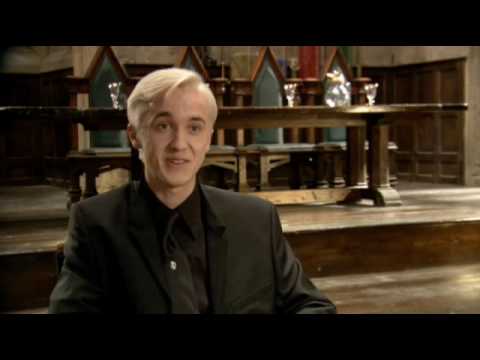 He had a very busy weekend schedule in Chicago as he also threw out the first pitch at Wrigley Field earlier in the day.

I meet Felton backstage at the Hollywood Blvd. Theater in Woodridge, Illinois on July 22 after parking far from the theater, as the parking lot was full and the line to meet him was endless.

He’s capturing attention in America during his press tour as major National publications, both newspapers and magazines, are donating plenty of print space to feature him. When he’s been asked about playing the ‘bad guy’, Felton says it’s been actually fun. I asked him to elaborate upon this point.

“I think it’s safe to say that most of the main characters in the Harry Potter films share a lot of similarities with their day to day person; certainly with Daniel, Emma and Rupert there are similarities, undoubtedly. I just feel lucky that Draco is really the one character that is the complete opposite from that. I wouldn’t want to say that it’s more fun to play a ‘bad guy’, it’s really fun to play a character that is very different from yourself, one that has such a strong personality as Draco. I guess you can say I’ve enjoyed scaring children thoroughly all these years,” replied Felton. 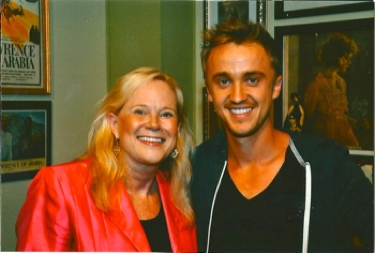 With the interesting and enormous amounts of movie props on sets over the years I was wondering if he was able to keep any of them.

Felton smiled and commented, “Oh, believe me, I asked for wands, broom sticks− you name it, and they weren’t very giving. But to be fair, many of the props are going to museums and exhibitions. What they did give me was Draco’s Slytherin ring that he’s worn for the past six years and it sits proudly on my mantle piece at home.”

He was one of the few actors and crew members that had not read the books before his audition and he had initially tried out for the Harry Potter role, as well as Rupert, and Hagrid and had to play catch up.

When asked if he’d like the tables turned and act in a film with Daniel Radcliffe as the villain and himself as the good guy, his face lit up and he exuberantly replied, “Oh, yes!” He then began to elaborate.

“Daniel and I have commented to each other that we probably won’t get another chance to work in another movie together but if we do, he’d be the bad guy and I’d be the good one.”

Movie sets vary and I was wondering about what a somewhat normal day would be like on the Harry Potter set.

“Generally it’s a slow process, up early, 7:00 am on the set, makeup and wardrobe; a lot of waiting around, there are so many different pieces that go into filming a Harry Potter film, patience is a must. It also depended upon what age we were. We’d go to education (real school) in between going to Hogwarts. It varied over the years.”

And finally, did he ever have a crush on Emma Watson?

Felton leaned back and smiled as he answered, “Ah yes, I hate to disappoint anyone, but not particularly. We’ve always been great friends but I never really did, although she had an early crush on me at about age 11; since then we’ve been very close friends. It’s nice that we can look back and smile on that time, but no romance now.”

Our interview was shortened due to the overwhelming amount of fans that were waiting to meet Felton. I happened to be downstairs when he entered the lobby, the screams from the crowd were deafening.

Hollywood Cinemas continues to bring the stars to the Midwest and as the saying goes, “Build it and they will come.” The crowd certainly came out for this actor along with excitement, cameras, clutched Harry Potter books, posters and plenty of smiling faces.