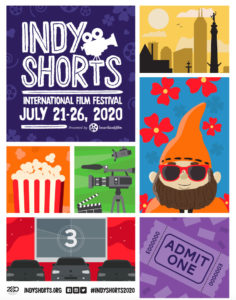 The Midwest’s largest short film festival has made the decision—the show must go on, July 21-26. Congratulations to all filmmakers who represent the best in the industry—more than 3,000 short films were submitted, with 128 films selected.

The Indy Shorts International Film Festival, presented by Heartland Film in Indianapolis, IN, has announced its lineup for the 2020 Academy Award-qualifying films. As a member of the Documentary Short Jury this past month, this is exciting news. It was an honor to serve on the jury as the films are top-notch. As a juror, critiquing the excellent films came down to the wire as the competition is that fierce. 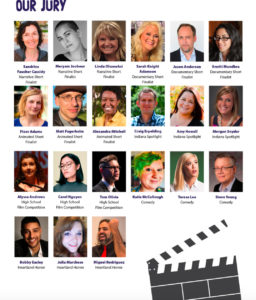 The current pandemic has mandated a hybrid format allowing the festival actually to happen. If you are looking to view the finalists—you will be able to enjoy them from the comfort of your own car, yes your car—the Tibbs Drive-in Theater in Indianapolis, IN will be screening the ‘Awards Winners’ Saturday, July 25, 2020.
You’ll be able to watch a selection of the 2020 award winners, including films that are qualified for the Academy Awards®! 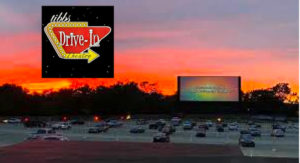 Here’s more information about the Tibbs Drive-In in Indianapolis. It would be best if you arrived early to ensure enough time to settle in before showtime. The movie sound comes through your FM radio, of which you must have a working car radio or portable radio to hear the movie. The Tibbs theater does not provide radios, so be sure to bring your own.

The Eventive Virtual Fest Program and the four-night film screenings at the Tibbs Drive-In can be found here: https://indyshortsfilmfestival20.eventive.org/films 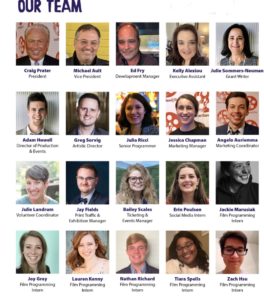 What are you most excited about for this year’s festival?

I’m most excited about the five screenings at Tibbs Drive-In Theatre! It took a pandemic for us to return to the classic drive-in scene, but I think people will love watching films under the stars. We’re premiering our new program, Heartland Horror at Tibbs Drive-In Theatre on Friday, July 24, and I think watching these horror shorts in the dark will enhance the spooky experience!

What have been some of the challenges this year?

Our biggest challenge has been creating a festival feel with personal interactions. People attend film festivals not only to see the films, but to meet the filmmakers, hang out with friends and have a shared experience. To help overcome this, we’re hosting live virtual Q&A sessions with filmmakers for all 18 programs. Viewers will be able to type their questions in and get a response just like they’re sitting in the theater. After every virtual screening, viewers will then be prompted to vote for the coveted Audience Choice Award. We’re also hoping that coming together at the drive-in theatre will give people a taste of the true film festival experience!

Will you be introducing the films at the Tibbs Drive-in?

To limit our in-person interactions, we will not be introducing the films at Tibbs Drive-In. However, we have pre-recorded information and introductions that will play as people are entering the drive-in.

How can the public get involved for next year’s festival?

The Heartland International Film Festival is running October 8-18, 2020! It’s not finalized yet, but it will probably be a similar format to our Indy Shorts with virtual and drive-in options. Our top priority is providing a safe event that showcases quality independent films people have come to love and expect. And we encourage everyone to join us virtually. Our new virtual platform has expanded our audience reach nationally and internationally!

In total, the fest features 128 films across 18 programs. All prize categories and $30k+ in cash prizes remain intact, and the festival staff is proud to announce that 50% of this year’s lineup is either directed or co-directed by women.

Expanded cash prize categories include Heartland Horror, Comedy, Student categories, and Directorial Debut. The winners of the Narrative and Documentary grand prizes will qualify for the 2021 Academy Awards as long as they meet all other requirements; last year, both qualifiers garnered nominations.