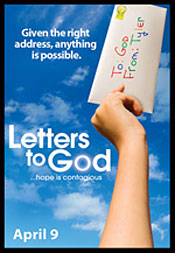 Mention the word ‘cancer’ in a conversation and no doubt all persons involved have been touched by the disease in some form or another.  Letters to God centers on this dreaded subject matter and does so in an inspirational and uplifting way.  No one wants to deal with this life threatening disease, but I’m here to tell you first hand ‘cancer’ is ubiquitously world-wide.

What works so well in ‘Letters’ are the themes that weave through the film; hope, the power of prayer and redemption. ‘Letters’ also teaches important lessons to children, as to how to relate to kids that are sick. Yes, they may look different but they’re not contagious and above all they need your friendship.

‘Letters’ main star and reason to see the film is an angelic looking child actor named Tanner Maguire who plays Tyler Doherty an 8 year old boy stricken with brain cancer. The story is based on writer and co-director Patrick Doughtie’s son in real life. This is Patrick’s story of how his son dealt with the disease. The screenplay has been changed a bit, Tyler’s mom played by Robin Lively is recently widowed and he has an older brother (Michael Christopher Bolten) in the film.

Director David Nixon is no stranger to films relating to God as he was the producer and co-director of the highly successful film (Fireproof 2008) starring Kirk Cameron. Make no mistake, the film is a spiritual film centering on God and faith. The title isn’t trying to conceal the genre; it is what it is. Of course this will depend upon whether or not the film is right for you. In this reviewers case it is consistent with my personal beliefs.

The parallel plots are interesting to view and give the tale depth. An alcoholic postman Brady McDaniels (Jeffrey S.S. Johnson), has recently lost custody of his young son and is living a meaningless life. He turns to the bottle for help and finds out that behavior leads to the same frustrating dead-end outcome time after time. He discovers Tyler’s letters and after reading a few begins to take an interest in the family and his own faith. Tyler’s letter writing is a way for him to deal with the cancer and to send his prayers to God at the same time. What amazes Postman Brady is the letters ask for help for all the people in Tyler’s life, even the school bully Alex (C J Amari).

A shinning light in the film is the bubbly Samantha (Bailee Madison), Tyler’s best friend. She’s adorable and helps Tyler in so many ways. Her grandfather played by Ralph Waite the famous dad in ‘The Waltons’ TV series and film; John Walton Sr. also provides guidance as well as comedic relief. He helps Tyler by telling him that God has chosen him to be a warrior.

‘Letters’ has so much to teach and say about dealing with adversities. The quality of the film is first rate and I can highly recommend this to families and churches everywhere.