The Canadian film, “The Guest of Honour” director and cast, shot in Hamilton, Canada, sat down with me during the Toronto International Film Festival in a round table format at the lovely Coffee Oysters Champagne restaurant. Writer-director Atom Egoyan along with actors David Thewlis, Laysla De Oliveira, and Luke Wilson were in attendance at various times.

Atom Egoyan, raised in western Canada, is known for his personal films that probe deep into issues—in his film “Guest of Honour,” a restaurant food and safety examiner, played by David Thewlis is the center of the film, and believe it or not—rabbits. Egoyan was asked about the origins of the film and expanded on the question.

“I opened a bar here in Canada several years ago and noticed the power the health inspectors have. Also, the fact that they are protecting our health and our society. I became aware of the control they held; they can be helpful, but they can also prevent things from happening. The examiners can come in at any time and simply close a place.

When asked about the rabbit theme? Egoyan replied, “As a child, I raised rabbits and showed them in competitions, those ribbons you see in the film are mine. I’ve always pondered the question, is a rabbit a pet, or is it dinner?

David Thewlis, an English actor, born in Liverpool, reflects on his very first meeting this Egoyan, “We had a natural rapport and I now feel like I have a friend for life.” And in reference to rabbits, “My only experience with rabbits is when I had one as a pet, and it ran away after five days.

What was his favorite scene to shot in the film? He said it’s the dinner heartfelt speech, in which he’s very drunk. Egoyan commented, “As a writer, you have no idea the joy I received from watching David’s dramatization of the speech, it was a deeply personal moment for me, as he handled it so brilliantly.”

Luke Wilson discussed why he was interested in the script, in which he plays a priest. Saying, “As a movie goer you are conditioned to a particular type of movie, but with this script I had no idea where the film was going. Atom’s a great director to work with as he does set you up with the scene.” On the topic of drama vs. comedy, Wilson said, “Comedy is lighter, and it’s fun to go to work. There are clear goals, how do you create laughter or who do you help another person be funny in a scene. Dramas you can take it home with you which is both good and bad. There is an unknown when the director says cut, you sometimes aren’t sure of your work, in comedy you know immediately as people start laughing, there’s immediate validation.

My burning question to Wilson centered on writer-director Wes Anderson, what had he learned from him, and what is he like to work with? “He’s great, I can’t believe how poised he was even at the beginning of his career, I can remember Wes going toe to toe with James L. Brooks the Oscar-winning director, Wes really held his own with him, and I’m very proud of him to still be working especially now with the film business changing and the studios don’t make the interesting movies they used to anymore. So many movies from the 70s and 80s would never have gotten made today Wes, Atom, Quentin Tarantino, and a few other people are still, oh yes, Steven Soderberg is still doing it, but it’s a small group. Wes is really an incredible guy.” [In reference to James L. Brooks, the writer, director, producer; he claims discovery of Luke Wilson and Wes Anderson as Brooks met with them in Texas and funded their first film, “Bottle Shock,” (2008). The cast included all of the Wilson brothers, Andrew, Owen, and Luke.]

And how does Luke handle the jealousy factor among his brothers? “We all got started together at the same time, so for us, it was a part of the same company. My brother Owen for instance, he never talks about business at all, you’ll go over to his house, and he’ll say I’m leaving tonight for Berlin, or I remember when I saw Midnight in Paris, I’m like you worked with Marion Cotillard she’s my favorite actor, how could you not tell me that? Are you insane? So, there’s not really jealousy; it’s more that I’m irritated.” 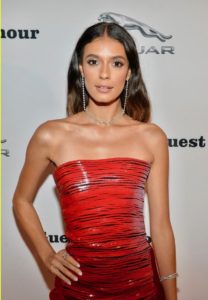 The lovely and talented Laysla De Oliveria portrays a high school orchestra conductor. She explained the differences in herself and her character. “I’m Brazilian in nature very vibrant, and my character Veronica is more still and reserved. I was excited to work with Luke and the cast to learn as much as possible; there was never fear in my first time out, just excitement.” And how did she prepare for the conducting scenes? De Oliveria replied, “My first time I had to conduct, it was not easy as the extras were actual student musicians; it was fun and challenging.” When asked if acting is a form of therapy, she said, “Yes, I agree that it is because you are taking tools out of your toolbox and digging deep to find the emotions.”

As luck was on my side that week, I happened to be staying with my niece, staff photographer Amanda Hinkle in Hamilton, Canada. I asked about the locations we should visit, and immediately David Thewlis, acting as his food inspector character, said, “I can tell you where not to go!” Of course that comment was met with uproarious laughter. Atom Egoyan quickly launched into travel guide mode and gave us his valuable insights into the city of Hamilton. “It has a restaurant culture there, what we don’t show in the film, is that it has the most waterfalls of any city in North America, (I think), you can actually go on a waterfall tour. It’s an industrial hub of huge ports, and in the 20s, it had a Vaudeville vibe, which was transplanted to Toronto, but I don’t think there are two major cities so close to each other that are entirely separate.

It has a very working-class history of migration, a large Polish community and an Italian community, and now, the second language is Arabic as with the migration of the Syrian refugees, that’s what we wanted to represent in the film as well, a place of transition. And those cultures transmogrify a bit, they’re allowed to have their own new space. What you see are some of the old factory bars that serve food, very working-class, then you see these high-end pockets. People from Toronto are migrating there because the real estate value is so desired along with the cultural aspect.”