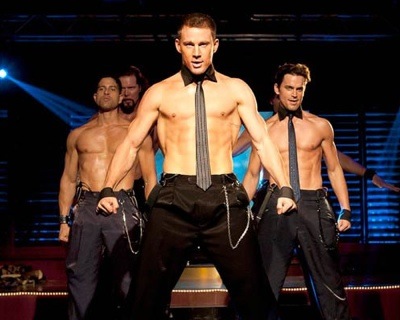 Strip Your Mind of Initial “Magic Mike” Stereotypes, This Film Has Substance

Let me first preface this review by stating the obvious.  I am a 20-something female and I love a good flick. It is an added bonus when an actor like Channing Tatum is on the big screen for about 95 percent of the film, partially clad I might add. Second, I’m not one of those females whose favorite movie is “The Notebook” or the girl who was dying to see Tatum’s most recent ‘dreamy’ flick, “The Vow.”

With that being said, I advise you to strip your mind of any stereotypes you may have about this film (pun most definitely intended).

Academy Award winning director Steven Soderbergh (“Haywire,” “Contagion,” “Oceans 11”) scores again with his latest dramedy, “Magic Mike.” He successfully makes the cheesy world of male stripping genuinely entertaining and noteworthy. Yes, those dance numbers in the barely-there fireman, sailor and Greek God costumes are in the film. Yes, these men are raunchy and brash under the spotlights and flying bills – but offstage, audiences will see that life isn’t just about raking in the dough at end of the night. This film presents both impressive acting and choreography. It is both dark and hilarious. Tatum (literally) runs the show. If I had a complaint it would be the title, “Magic Mike.” While it does exude a tacky, superficial feeling, which is commonly associated with stripping, I feel like it does its detriment to a film that actually has a concrete storyline and substance.

Mike (Tatum) is a self-proclaimed entrepreneur who tackles a broad spectrum, from stripping and owning a roofing business to car detailing and designing custom furniture. Most of his living is made as a male dancer at a local Tampa strip club, Xquisite. Mike’s boss is the high-strung, intense club owner, Dallas (Matthew McConaughey). His crew, Ken (Matt Bomer), Tarzan (Kevin Nash), Tito (Adam Rodriguez) and Richie (Joe Manganiello), whose nickname I cannot divulge, has more six packs than your local liquor store.

One day, Mike meets an aimless 19 year-old, Adam (Alex Pettyfer), who lives on sister’s (Cody Horn) couch. Trying to make a few bucks, he lies about his skills in the tile-roofing department in his Craigslist ad. Mike becomes Adam’s mentor and before Adam knows it, he is no longer nailing tile to a roof. Adam quickly acquires the nickname, The Kid, after performing a nervous, impromptu striptease to “Like a Virgin.” Despite his lack of dancing skills, Dallas sees his potential. Next thing we know, The Kid is buying American flag thongs and shaving his legs with his sister’s pink razor. Adam takes his newfound career into overdrive, taking the film down a dark path.

Tatum is excellent in his witty, cocky-on-stage but humble on the streets character. Some may reminisce about the “Step Up” days in this film, as Tatum’s back flips off of the stage and a bridge are quite impressive. McConaughey’s power hungry role is hilarious. The seductive Manganiello plays the ‘I’m sexy and I know it’ Richie all too well. I was surprised he did not receive more screen time. Pettyfer, who is relatively new to the acting scene, certainly pulls off his rugged, mysterious, loose cannon of a character. Horn, who is probably making her biggest acting debut yet, proves her natural talent as Adam’s tomboy sister, Brooke. She is a sweet yet uptight, skeptical and (understandably) protective sister. Audiences can feel her try to resist her attraction toward Mike and, unlike every other male stripper crazed girl, Horn adds an authentic component to the film.

Writer Reid Carolin’s script is both comical and serious. The dialogue is utterly natural throughout and coupled with Soderbergh’s agile camera techniques, he creates the feeling of an onlooker. It is obvious that these guys genuinely had a great time filming. While Tatum confirmed this observation in his interview with Sarah’s Backstage Pass he was also the first to say that the guys always showed up on time and were ready to work.

Speaking of work, Tatum actually knew a bit about the male stripping industry prior to filming, as he was an exotic dancer at 18 and 19 years old. As front man in “Magic Mike,” his moves reflect that experience. “I learned a lot and I got out fairly unscathed,” he said.

Bottom Line? Don’t judge a book by its cover. Bodies aside, “Magic Mike” earns 4 stars. The film exploits the highest of highs and the lowest of lows in the male stripping industry. Expect both laugh out loud and poignant moments. Soderbergh’s direction is worth a viewing in itself. Please note the R rating is for graphic nudity, pervasive sexual content, language and drug use. Some may think that only straight women and gay men would find “Magic Mike” appealing but I think the shameless guy humor caters to straight men as well. Oh, did I already mention that Tatum is in front of the camera for about 95 percent of the film?