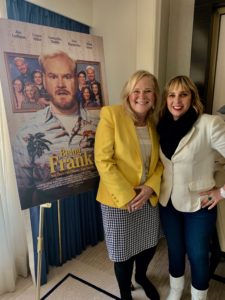 Miranda Bailey, talks about her childhood parent’s separation, being a female in the filmmaking business, her role models and more.

My interview with Miranda Bailey occurred in the beautiful Peninsula Hotel in Chicago, on June 10, 2019, she’s the director of the film “Being Frank.” This is her directing debut, in a movie that is very personal to her, as she experienced some of the feelings that are exhibited by the characters. I appreciated the film, as I believe it serves a purpose in helping kids and teens to deal with family separation. Also, the concept of that ‘new’ family, that dad or mom unknowingly favor. The film serves a purpose in showing kids and teens that it’s okay to state your feelings and stand up for what you believe to be right. In this case, Frank’s son is the moral compass of the film. Yes, it’s a “different” type of family film, but it brings issues to the forefront that do need to be addressed. It’s also, hilarious!

I started by complimenting Miranda Baily on her filmmaker letter that is posted on Chicago’s Landmark Theater website as it explains her vision.

Bailey stated, “Our movie is all about lies. And the lies that we tell others and the lies we tell ourselves.”

For Bailey, it’s somewhat of a personal project, as she had some fears and pains surrounding her parent’s separation, and her father moving to a different town, with the addition of exploring forgiveness. I asked her to speak about that?

Miranda Bailey: I was really lucky with this movie because I was able to say all the things that I wanted to say to my dad back then that I didn’t. And I was also able to have my mom tell me what she should have told me, but that she didn’t. It was just kind of a way for me to explore those aspects of my life. Obviously, my father didn’t have two families or anything like that, but teen angst is teen angst and wanting to please your father or your parents, we all go through that.

SKA: What does Jim Gaffigan as Frank bring to your film? I know that’s a loaded question. 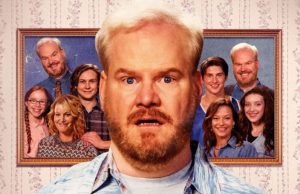 MB: Jim was the perfect casting choice for this because one, it’s unexpected and I didn’t want the person who’s playing Frank to be someone who you already knew like, oh I can’t wait to see that other Jason Bateman film. I wanted someone who wasn’t necessarily known for being a big movie star because I wanted it to be fresh. But also he’s really likable. And also it’s kind of like a pun on him. Being the dad, the all-American dad.

SKA: I enjoyed all of the performances honestly. But for me, I felt that Logan Miller was a standout. Similar to Lucas Hedges in “Manchester by the Sea,” because I just loved his performance in that.

SKA: I loved that performance because he’s being a teen, he’s being himself, and I felt that his character Phillip, was very natural. He’s just trying to get his fair due in high school and actually in life. And he should have his fair due. So for that matter, you really can’t blame him. What did he bring to the film?

MB: Well Logan, I was really lucky with, I was thinking, how am I going to find someone like that, and sure enough, I found him. I was at Sundance, and a friend of mine was producing a movie; I was late, it was dark, and they hustled me into the front seat. While watching this movie, Logan came on screen, and I whispered to my friend, “Hey, wouldn’t that guy be great as Jim Gaffigan’s son in my film?” When the lights came up, I was sitting next to Logan Miller. He was booked on my movie three days later.

SKA: Of course, I do need to talk about Danielle Campbell because she’s our Hinsdale, Illinois girl. I interviewed her in 2011 for the movie “Prom.” I thought she was great, as well. She’s a real natural too, as far as, she just looks that way.

MB: Well, first of all, she’s the most gorgeous thing I’ve ever seen in my life she’s like the girl next door who’s also incredibly beautiful.

SKA: I feel that you are a leader in helping females have a more significant presence in filmmaking. I served on the Narrative Jury at the Mendocino Film Festival, last week with Claudia Puig as Program Director and she had a great panel on Women Filmmakers. Do you feel we have made any strides in equality for jobs in filmmaking?

MB: I do. And I think there’s been enough news that the studios and the smaller financing entities know that they have to include women in looking for filmmakers and I’ve seen it happen. I don’t know if they get the jobs necessarily, but they’re definitely being considered more than they were before, yes.

SKA: What I got from the panel was they were talking about when it gets down to distribution and sometimes the deals that are made, as far as giving away some of your rights.

MB: Well, I think that’s hard no matter what. What I noticed last year in the Oscars particularly, was we had a lot of films that could have been in the running for Oscars. But most people who don’t work in Hollywood don’t understand that really that’s all about how much money you have, and how much money your movie makes, and then how much money the company, the distribution has to put behind a campaign. While they could put a campaign for a lot of the actors and actresses, they didn’t put any campaign money behind the female directors I noticed. And I have to say as someone who saw all of those films, that was pretty evident to me as latent sexism that even the studios and the smaller indie distributors don’t even know that they’re doing.

Miranda continued talking about her experience with people’s general perception of a director.

MB: I think people think of the image of a director, and they see a man. And I mean, I know this for a fact. When I went to the Vail Film Festival, I was an actress there, and my director was a female, and we were on a panel, and the whole festival was about female filmmakers, and the newspaper, the Vail newspaper, (Vail Daily) put a photo of a man directing.

MB: Well, Oprah for sure and Elaine May was a big influence in my life, because she was writing and directing and acting in her own movies, and I did want to do that from a very young age.

I asked if she had anything else she wanted to say about the film.

MB: I’m curious as to what people think about it. If they think it’s a comedic drama or a dramatic comedy?

SKA: I’m going to talk to Jim Gaffigan next about that. For me, it doesn’t have to be a father with two families, and the lie, it could still be a dad that’s moved on and has another family, and he’s treating that family so differently than the kids from his first family. I’ve never seen that anywhere in film, and I’m an advocate for quality children’s movie, so I’m pleased about the fact that your film could help kids see they are not alone in their situation. Also, Phillip’s character (as the moral compass) stands up for himself and makes his voice heard; to me that empowers teens, which is a good thing they can learn from the movie.