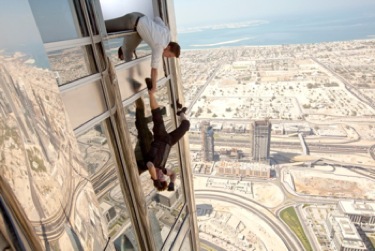 Your mission, should you choose to accept it, is to decide whether or not to see the fourth installment of the spy film series, ‘Mission Impossible.’ The series is based on a popular television show of the same name that aired from 1966–1973 starring Peter Graves. In 1996, Tom Cruise brought the film series to life with a newly created spy agent, Ethan Hunt − which has brought millions of dollars to the box office and an impressive international fan base. After screening the film in IMAX format, my suggestion would be to run, not walk, to your local Cineplex and get in on the action packed film while you can. During the viewing of this highly entertaining and thrilling film, my mind kept focusing on one word − ‘action,” as unquestionably, when director Brad Bird shouted that word at the beginning of each scene, he clearly meant it. Action is precisely what you will experience and to be unequivocal − non-stop, pulsating action that permeates through every frame. Screenwriters Josh Appelbaum and Andre Nemec have written a clever script that creates parallel action plot lines for the IMF (Impossible Mission Force) team. Ethan Hunt is paired with a beautiful kickboxing ace Jane Carter (Paula Patton), while agent William Brandt, played by Jeremy Renner, is paired with computer wiz Benji Dunn (Simon Pegg). Indubitably, if action is what you seek, this is your film. Academy Award winning director Brad Bird is new to ‘live action’ as his prior work includes an impressive list of animation films such as “The Incredibles,” “Ratatouille,” and “The Iron Giant.” Several action scenes in “Ghost Protocol” are nail-biting tense and for those of you with vertigo, somewhat maddening at times. Cruise has stated that he completed his own stunt work and when he’s dangling from the world’s tallest building located in Dubai, the Burj Khalifa, at 828 meters using only gloves that stick to the windows as support, it is visually incredible. To put things into perspective, the Willis Tower in Chicago is 442 meters in height. This scene alone is worth the price of admission, particularly on a large screen.
Another plus of the film is the addition of the new team agents as they add more depth, humor and story telling. Jane Carter is gorgeous, sensual and tough all at the same time. She’s the human side, while Hunt appears almost robotic and somewhat alien in his unfathomable physical feats. Together them meld into the perfect unbeatable espionage team. Their chemistry is easy going and both are a pleasure to view. William Brandt has some history with Hunt and his wife from the pervious films, and we find out more about that near the end. Quirky, English accented agent Benji Dunn adds humor to the team with all the cool technology and spy gadgets, similar to agents Q and M in the Bond films. ‘Ghost Protocol’ begins with Hunt’s escape from a Russian prison and proceeds to exotic locations such as the Kremlin, in Russia, Dubai and Mumbai, India. The cinematography is eye-popping as the camera angles are varied to excess − creating superior visuals to viewers. I realize that elaborate sets were created and CGI was used, but I have to tell you, it’s extremely difficult to know where all those elements are placed in the film and truthfully…that is why they call it movie making magic. As far as I’m concerned, it worked, so I won’t even bother telling you how or why because I really don’t want to know myself. To sum up the plot, upon escape from prison, Hunt’s mission alongside the team is to infiltrate the secret archives of the Kremlin and locate files that would identify Cobalt (an unknown currier) before they are erased. After this escapade, the United States President activates “Ghost Protocol,” in which Hunt’s team goes rogue in order to proceed outside the guidelines of the IMF and to stop an impending nuclear disaster. Bottom-line: Action packed thriller, the best of the film series, great script, new team is entertaining and IMAX experience is worth the money. Cast: Tom Cruise (Ethan Hunt), Paula Patton (Jane Carter), Jeremy Renner (William Brandt), Simon Pegg (Benji Dunn), Michael Nyqvist (Kurt Hendricks), Lea Seydoux (Sabine Moreau), Tom Wilkinson (IMF Secretary), Anil Kapoor (Brij Nath) Credits: Directed by Brad Bird Screenplay by Josh Appelbaum and Andre Nemec, based on the TV series of the same name. Paramount Pictures and Bad Robot Films Run Time: 2 hours 13 minutes Written by Sarah Adamson© December 15, 2011