“Moonage Daydream” is playing in theaters, and the IMAX it’s a documentary centering on David Bowie and his roles as a musician, painter, actor, and world traveler. Director Brett Morgen paints an intriguing portrait through Bowie’s interviews that span decades.
Clips are shown that might have influenced David Jones as he invented and repeatedly reinvented himself as David Bowie, Ziggy Stardust, Major Tom, and the Thin White Duke. He was a Brixton boy who donned a persona, artistic preferences, and belief systems as if he were changing hats, hairstyles along with hair colors.
He said, “I was a Buddhist on Tuesday, and I was into Nietzsche on Thursday,” he was constantly changing his musical works, looks, and interests. 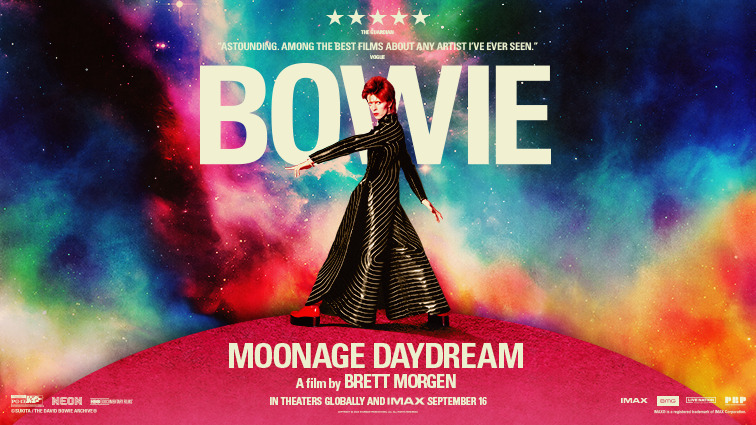 By far the perfect film to celebrate a multifaceted life of visual expression. Daydream celebrates the immortality of his art, drawing upon an astonishing depth of rare footage, including live performances of classic songs such as “Space Oddity,” “Sound and Vision,” “Heroes,” and the mass appeal of “Let’s Dance. Director Brett Morgen met the challenge of shaping Bowie’s career with kaleidoscope imagery.

David Bowie’s 54-year career is explored, including 40 exclusively remastered Bowie songs, and is the first film ever sanctioned by the Bowie Estate, with local access to the artists’ archives. His interviews are surprisingly open and frank. Reflecting on his suburban childhood, years of disquiet, and falling in love with the beautiful model Iman, his wife of 24 years. Also included are his attitudes toward bisexuality and gender blending in the early ’70s.

For the best experience, I’d recommend seeing it at the IMAX.