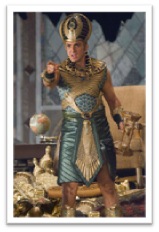 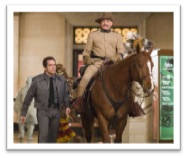 Night at the Museum: Battle of The Smithsonian is an example of an entertaining family film that all can enjoy. As a former teacher I say bravo to director Shawn Levy and screenwriters Robert Ben Garant and Thomas Lennon for presenting America’s and the world’s ‘historical personas’ in such a highly entertaining way. The film is an amusing history lesson given by a star studded cast with a smart script. The film earns a grade of A+. Ben Stiller is back as Larry Daley and this time he has a smashing co-star Amy Adams as Amelia Earhart.

The story has progressed since we last visited Ben Stiller as the night guard Larry Daley three years ago in the film “Night at the Museum.” Larry’s quit his job as a guard and finds fortune through inventing infomercial-type products. Larry realizes his discontent in his new busy life and decides to visit his old museum of Natural History in New York where he is informed that many items and exhibits are to be sent to Washington D.C. to be archived as they are considered out-of-date.

Next he receives a distressed call from his miniature cowboy friend, Jedediah. Apparently the Egyptian ruler, Kahmurah is in a very bad mood and plots to take over the museum by unleashing his ‘Army of the Underworld’. He also has the help of three major bad guys; Ivan the Terrible, Napoleon and Chicago’s own notorious Al Capone.

Larry rushes to Washington D.C. and meets Amelia Earhart his new gal pal and together they search the numerous buildings in order to halt the intended take over. Along the way the duo meets numerous awesome historical personas in particular; Abe Lincoln, the Wright Brothers and Teddy Roosevelt.

What makes this film so special is that each scene is action packed with a cast of exciting and diverse characters and the special effects are eye-opening. The script is comical and the jokes are fluent. Parents and kids will enjoy the banter between the good guys as well as the bad. The artwork also has special magical powers and ‘comes alive’ as Larry and Amelia find themselves inside of the famous V-Day photo. I found these scenes particularly memorable and unique.

Basically, this film does so many great things for families. First and foremost, it teaches about history in an amusing way and jogs our memory concerning some of America’s greatest heroes. Teddy Roosevelt says to Larry at one point in the film, “The greatest change often brings the greatest opportunities.” This line is another example of numerous teaching moments that resonate throughout the film. Again, what’s not to like? The genre is fantasy, with a hint of reality as these magical characters were really alive at some point in history and were ‘real’ people. Lastly, this film relates to all ages and can be enjoyed by everyone; even Grandpa and Grandma, and that’s hard to find these days.