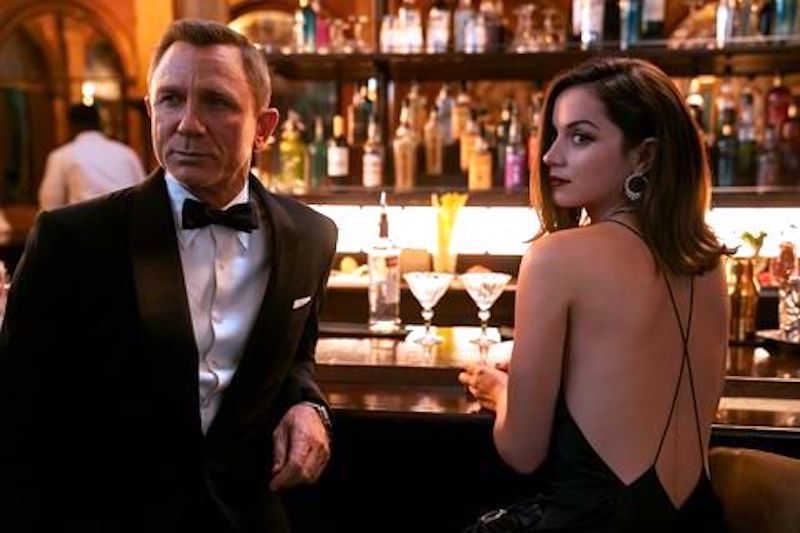 Hi Carl and hello to all of our listeners out there; tonight I’m going to talk about the latest James Bond movie, “No Time to Die,” and two Film Festivals opening this month.

Daniel Craig stars as Bond and has made it clear to all that this is his final film. The director is Cary Joi Fukunaga. Daniel Craig’s performance is incredible, although I wasn’t a fan of the script. The beginning scenes are the best and worth seeing on the big screen; however, the 2 hours 45-minute run-time drags.

Fans will enjoy seeing Bond’s non-stop hand-to-hand combat and his iconic driving skills. There is so much I loved about this film, and there is so much I didn’t like. Here’s the scoop, Anna de Armas’s dress (she’s from “Knives Out”) is to DIE for. Two side slits for kicking and hand-to-hand combat—she stole the show. Sadly, she’s only in about 10 minutes. Daniel Craig shows us more emotion and his ultra-slick Bond skills; Rami Malek’s villain was too blah, and don’t even get me started on the ending.

Side note: I’m a true Bond fan and have met Pierce Bronson in London; he was so cool. Also, I’ve interviewed the director and screenplay writer of “No Time to Die,” Cary Fukunaga, in Chicago in 2011. I admire his work. The film is too long and dragged for me the last 45 minutes.

The Chicago International Film Festival is on now and is showing major films such as “Drive My Car,” a Cannes Winner, and a Toronto Film Festival winner, “Belfast.”

Jane Campion, Kenneth Branagh, Céline Sciamma, and Apichatpong Weerasethakul are just some of the acclaimed directors presenting their latest films in this year’s program alongside such highly anticipated Chicago premieres as “Dune,” “C’mon C’mon,” “The French Dispatch,” and more.

Film Fest 919 starts today, October 18 in Chapel Hill, NC, showing “Spencer” and “King Richard,” “The French Dispatch” and “The Lost Daughter.”I’ll be attending for the week.
Join us as we present the Spotlight Award to Diane Warren, one of our most celebrated songwriters. The evening will include a conversation with Diane moderated by Vanity Fair’s Katey Rich and a high-power laser show choreographed to many of her hit tunes.
TICKETS: https://carrawayvillagedrivein.com/…/laser-tribute-to…/
Some of the hits and notable songs that Warren has written throughout her career includes “Because You Loved Me” (Celine Dion) from Up Close and Personal, “How Do I Live” (Trisha Yearwood) from Con Air and (LeAnn Rimes), “I Didn’t Know My Own Strength” (Whitney Houston), “Can’t Take That Away” (Mariah Carey), “Look Away” (Chicago), “Have You Ever” (Brandy), “Un-Break My Heart” (Toni Braxton), “If I Could Turn Back Time (Cher), “I Don’t Want To Miss A Thing” (Aerosmith) from Armageddon, “I Was Here” (Beyoncé), “Til It Happens To You” (Lady Gaga) from The Hunting Ground, “Stand Up For Something” (Andra Day and Common) from Marshall, “I’ll Fight” (Jennifer Hudson) from RBG, among many others.

Tickets are on sale now. https://filmfest919.com