“The Express” is the true story of Ernie Davis, the first African American college athlete to receive the Heisman Trophy. Davis was given the nickname ‘The Elmira Express’ by the press as his hometown was Elmira, New York. He was embarking upon his NFL career when he was stricken with leukemia. Davis sadly passed away at age 23.

Ernie Davis is a true American hero in every sense of the word and his story is one to be admired for his strength and courage. The film is a tribute to his life as a brave young man and as a gifted athlete. He played college football for Syracuse University and lead his team to a National Championship in 1959.

Omar Benson Miller is an emerging Hollywood talent who co-stars in the film and plays Ernie’s roommate, best friend and teammate. Miller has appeared in other films such as “Shall we Dance” with Richard Gere and Jennifer Lopez, and the new Spike Lee film, “The Miracle of St. Anna” a historical account of WW II soldiers in Italy, which opens September 24, 2007.

We chatted by phone and the 6’7” actor’s sunny personality rang through loud and clear.

Sarah Adamson: Can you tell us a little bit about your family?

O. Miller: I have a huge family. All from Southern California 6 boys and a girl I’m the youngest.

S.A.: Is Forrest Whitaker your Uncle?

O.M.: No, lots of people think that. He’s a friend of mine and he lives in Southern California. He’s really a nice guy, I was so happy for him when he won his Oscar.

S.A.: Has he given you any advice?

O.M.: Just try to stay honest and bring truth to your work. It’s very important to be authentic, there’s nothing worse than going to the movies and not believing the people on screen.

S.A.: During the filming of “The Express”, can you tell us about any memorable moments? 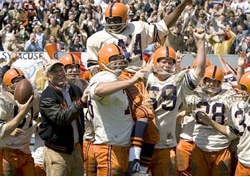 O.M.: The very 1st day of shooting April 7, 2007 when I left LA it was sunny and 75 degrees and it was 22 degrees and snowing in Chicago. We were outside doing push-ups and I was just thinking why did I do this movie? But it turned out to be a good decision for me.

S.A.: What’s it like to work with Dennis Quaid?

O.M.: Dennis is really “macho” we have a lot of verbal sparring matches during the filming. He’s a good guy off camera; it was good to work with him. We had a great time away from the set going out in Chicago.

S.A.: What message do you hope people take away from this film?

O.M.: I hope that Ernie’s story becomes well known. He was a real life hero that faced a lot of adversity. Through his courage he really triumphed. This is not just another ‘rah rah’ football movie there’s so much more to take away from this. I hope people give this movie a chance because football is only the backdrop. It’s not your standard faire.

S.A.: What advise do you have for aspiring actors?

O.M.: You have to be relentless and you can’t give up. You have to grow a layer of tough skin because there’s a lot of negativity going to get thrown at you. I suggest just continually praying and staying grounded in God. It has allowed me to move forward, it got me through the mud.

S.A. Thank you so much for speaking with me today and best of luck! 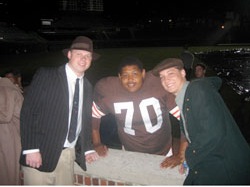 Chris Nolda, Omar Benson Miller and Brian Wysocki on the set of “The Express”