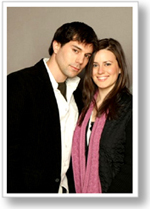 Yes, This One Will Scare You!

“Paranormal Activity” is just the kind of scary film that I can sit through in a dark movie theater and appreciate. It’s not a slasher film nor one of those appalling ‘Saw’ type films, it’s actually fascinating scary stuff!  Believe me, I truly am a wimp when it comes to the horror genre, but there’s been enough buzz surrounding this film that I had to see it for myself. It’s been compared to the “Blair Witch Project,” a low budget film that had people flocking to the theaters in 1999.  The only story line the two films have in common is the raw footage on a cam-corder that’s discovered.

As the film begins, we find out very quickly that the footage is all after the fact and what we are about to see has not been tampered with, edited, spliced, etc.  A young couple is introduced; Micah Sloat and Katie Featherston. These two suburban twenty-somethings have been together for three years and are now embarking on a new living arrangement as Katie has just moved into Micah’s house. By all appearances everything seems to be fairly typical accept for the fact that Katie has a demon who haunts her. Micah decides to capture the demon on film and buys a new handy video camera. He is over-the-top in his desire to ‘get everything’ on film and totally annoys Katie with his non-stop filming. His filming of everything is what makes the film so appealing as we not only see them interact as a loving couple, but also how they interact under undue stress.

The introduction to this couple is drawn out, but that’s ok because by the time creepy things start to happen in the house, you feel as though you know this couple fairly well. Micah is macho and isn’t afraid of much. He mocks the demons and fights back with words and actions. Katie, who has been the haunted victim since she was 8-years-old, accepts her circumstance, but is nonetheless scared to death. Both don’t get very much sleep as the demon prefers to do his haunting in the middle of the night, usually starting around 2:00 a.m. when both are fast asleep.

We are the observers in this young urban couple’s life and lots of work has gone into making the film feel as believable as possible. Micah has set up his video camera on a tripod so that he can observe what happens in the bedroom while he and Katie are sleeping. We are given a visual written record of every evening’s footage; (Night 3, Sept. 20, 2006, 2:06 a.m., 2:07 a.m. and counting). We become familiar with this visual as it signals a cue and is part of the film’s pattern and intrigue. By Night 20, the suspense has been building just enough that you may jump out of your seat if the guy behind you simply rustles his popcorn.  The film’s repetitiveness is its best quality in building suspense and utter terror.

I don’t want to give too much away and I would caution you against reading very much about the film before you attend. I will tell you that they call in a ‘psychic expert’ and he is no help whatsoever to the couple. What he does add is the perfect excuse to scare us further as he confirms that whatever is in the house is not a friendly ghost. Oh yes, he has a bad vibe from this demon, a very bad vibe, and he suggests that they do not try and communicate with it as it’s not of this world! He further warns the only thing this non-human wants is one thing and that one thing is Katie!

Oren Peli is the film’s director and the couple is played by themselves. The psychic is played very convincingly by Mark Fredrichs. If you like to be scared, then I suggest you check it out.  “Paranormal Activity” has all the ingredients for a good fright without the blood and gore. And — hey, it’s here just in time for Halloween!