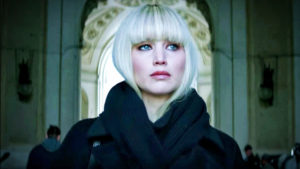 Extremely Brutal and Degrading Toward Women

Red Sparrow rated R is based on a novel of the same name by Jason Matthews. Jennifer Lawrence stars as Dominika Egorova Russian Operative − a dangerous, abusive life and profession she did not choose.

After a deliberate career-ending fall as a result of her ballet partner’s intention to break her leg− she’s forced into an agreement to save her mother and their home. Thus, she has no choice but to enter a world of seduction, (physical, sexual and mental abuse) and betrayal.

Let’s Take a Listen: (Clip from “Red Sparrow,” Trailer) Lawrence speaking, “I was told to take a man to a hotel they said he was an enemy of the state.” A man, a Russian politician, Dimitri Ustinov, played by Kristof Konrad begins speaking, “Take off your dress off.” Lawrence continues, “And in exchange, my mother would get the doctor she needed. Instead, they cut his throat.”

Here’s Another Clip: Her uncle speaking, “She’s a sparrow you should work with me and make him pay. You are better at this than any other. Your only problem is that you have a soul.”

The film is extremely brutal and degrading toward women. Charlize Theron’s character in Atomic Blonde a similar Russian Spy film had a choice in her profession Jennifer Lawrence’s Sparrow − has no choice. She is forced and manipulated.

Red Sparrow is full of problems, of which the feminist mindset pulls the #metoo movement into reverse. Not to mention the film is way too long and slow in parts.

The creation of a love story between an American spy, Joel Edgerton who does try and save Lawrence,of which, the arch is too late in the film. It’s not believable; we truly aren’t convinced that either would risk everything to fall in love with the enemy. At this point, she’s beaten and tortured while smug looking characters go about their routine business.

Lawrence isn’t the only woman that’s tortured; her roommate is tortured and killed by use of knives and an electric skin grafting machine. Who needs to see this? No one. This is not entertainment, especially when the drawn-out brutal scene goes on and on and on. Way too gross and unnecessary. In my book− creepy.